Prasanna D Zore/Rediff.com reports from Shivaji Park and the MMRDA ground to sense the mood of Shiv Sena workers — from the Uddhav Thackeray and Eknath Shinde camps — at the Dussehra rallies. It rained fiery speeches at the MMRDA ground.

Outside the MMRDA ground, it rained chaos.

While Shewale and Gawali were pumping verbal barbs puncturing the Thackeray scion’s lifestyle, thousands of Shinde supporters — egged on by their local MLAs, they had come from far-flung districts of rural Maharashtra — were heading back to their vehicles.

“There isn’t enough space inside,” complained a villager who hails from Sillod, the constituency of Abdul Sattar, the lone Muslim minister in the Eknath Shinde government. “We are hungry too and there isn’t enough water around,” he grumbled.

Sillod, in Aurangabad district, is some 420-odd kilometres from Mumbai and Sattar had claimed ahead of the rally that he had arranged more than hundred buses to ferry in people from his constituency to attend Eknath Shinde’s Dussehra jamboree. Hundreds of state transport and private buses, four wheelers that had wheeled in several thousand supporters of MLAs from rural Maharashtra were parked randomly inside the Mumbai University’s Kalina campus.

The efforts made by MLAs from the Shinde camp to amass a sizable number of people at the MMRDA ground were visible.

Equally visible was the inadequate facilities that Shinde supporters complained about.

Scores of mobile toilets lined the entrance to the MMRDA ground remained soiled and unusable. Many relieved themselves out in the open or behind the mobile toilets.

A stall — meshed between two separate rows of mobile toilets — served tea to those thirsting for chai. What motivates ordinary workers of any political party to travel hundreds of kilometres without enough food, water, sleep or toilet facilities to attend a show of strength organised by their leaders’ leader?

Supporters of the Shinde camp’s MPs and MLAs, on their way back to their vehicles — many admitted they would rather rest in their vehicles than go back to listen to Chief Minister Shinde speak — refused to entertain such inquiries. “We were told we would get a chance to click a selfie with Shinde saheb,” a sarpanch of Pachora village in Nandurbar district, said.

He had reached the MMRDA ground at the Bandra Kurla Complex in suburban Bandra, north west Mumbai, along with some 200 people from his village in three buses, after covering almost 430 kilometres in nine hours.

The grueling journey back home would only begin after Shinde finished his speech sometime before the 10 pm deadline imposed by the city police on such political gatherings in Mumbai.

“We feel Balasaheb will be there among us at the MMRDA ground. I feel Balasaheb himself has called me to be there and, I am sure, like me, all the Shiv Sainiks who will gather this evening will feel the same,” says Suraj Sapkal, a staunch supporter of Magathane MLA Prakash Surve, referring to the late Shiv Sena founder Bal Thackeray.

The road from the MMRDA ground to Shivaji Park winds itself through Kala Nagar, where Bal Thackeray and his family set up their home at Matoshree in thr 1960s.

On Wednesday evening as MPs and MLAs from the Eknath Shinde camp launched scathing attacks on Shiv Sena President Uddhav Thackeray and his elder son Aditya — Bal Thackeray’s youngest son and grandson — the atmosphere outside the lane leading to Matoshree, bore a deserted look.

About 10-12 policemen stood guard outside a smaller gate that is the entrance to the Thackeray residence.

Mumbaikars in the vicinity went nonchalantly about their routines. 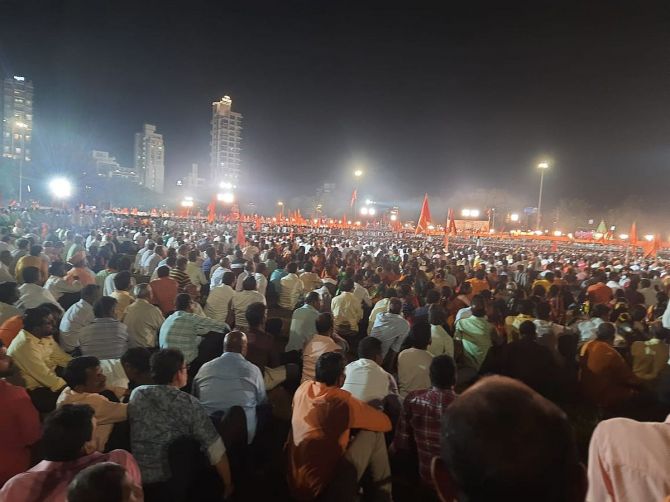 Uddhav, his wife Rashmi and sons Aditya and Tejas were perched atop a grand stage at Shivaji Park, the traditional bastion of the Shiv Sena’s annual Dussehra rallies.

The cool winter breeze that swept from across the bay didn’t offer much relief to the audience from the heat generated by hundreds of halogen lights that lit the park. Uddhav Thackeray was speaking at a party rally for the first time after the vertical split in the Shiv Sena saw its legislative strength dwindle from 55 to 14 when the Bharatiya Janata Party’s Devendra Fadnavis and former Thackeray confidante Eknath Shinde joined hands to topple the three-party Maha Vikas Aghadi government in June in a midnight coup that saw Shiv Sena MLAs take a tour of India from Mumbai-Surat-Guwahati-Goa-Mumbai.

There was anticipation in the air when Uddhav began to speak.

Already on the back foot after Shinde’s coup, Uddhav tried his best to roar like the Tiger — a sobriquet that stuck to his late father Bal Thackeray owing to his charisma, oratorical skills and daredevilry while attacking his political opponents — but failed the audience test.

“You are traitors and you will always remain traitors. Nothing can help you wash away this stigma off your foreheads,” Uddhav raised his pitch while attacking Shinde and the 39 MLAs who are part of the government with the BJP. The audience applauded, but the spark and connect was missing.

The response to his barbs against Fadnavis and BJP leader and India’s Home Minister Amit Shah too don’t elicit much response. The only time Thackeray touched a raw nerve among a young, urban, audience was when he accused the BJP of surreptitiously snatching Mumbai away from Maharashtra and taking prime industrial projects out of Maharashtra.

“Since the time the Shiv Sena began ruling Mumbai (the Brihanmumbai Municipal Corporation), the Marathi manoos has been holding an upper hand in the city,” said Prashant Shivekar, an office bearer at the Shiv Sena’s social media wing.

Shivekar, who is in his early 20s, agreed with Thackeray’s views about the BJP’s plan to snatch Mumbai away from Maharashtra.

“The BJP just doesn’t want to finish off the Shiv Sena; they want to destroy Balasaheb Thackeray’s legacy. Only then, they think, will they succeed in their design (of separating Mumbai from Maharashtra). But Mumbai’s and Maharashtra’s Marathi manoos will uproot such evil intentions,” said Akshay Rother, the Shiv Sena’s vibhag pramukh (divisional head in a district) from Murbad in Thane district. Rothe, 26, like Shivekar, vowed to show the BJP and ‘traitors’ of the Eknath Shinde camp during the forthcoming elections to the BMC.

“The Marathi manoos must stand by Uddhav saheb or else bid goodbye to Mumbai,” said Shivekar.

Ask any Shiv Sena worker at Shivaji Park what they think about Eknath Shinde’s claim that he and his band of 39 MLAs — who rebelled against Uddhav Thackeray for joining hands with the Congress and the Nationalist Congress Party as they opposed Bal Thackeray’s Hindutva — are khuddars (self-respecting people who rebelled to protect Bal Thackeray’s brand of Hindutva) and not gaddars (traitors, as Uddhav Thackeray emphasised again in his speech at Shivaji Park) and they reply.

“If you really want to prove you are khuddars then remove Balasaheb’s photos from your posters and banners, and win elections. Please prove your khuddari (self-respect) by using photos of Narendra Modi, Amit Shah and Devendra Fadnavis on your banners and come to the Marathi manoos to seek votes,” said a group of women Shiv Sena workers from Nashik.

“The Marathi manoos will show you what you are.”