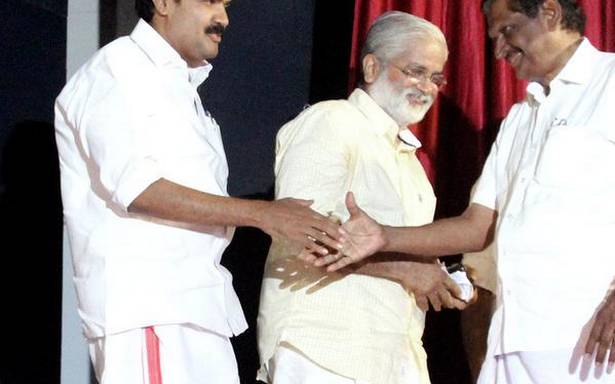 The managerial acumen coupled with pragmatism exhibited by K. M. Mani had played significant role in the successful implementation of various development projects during the term of the previous UDF government, AICC general Secretary Oommen Chandy has said.

He was speaking after inaugurating a K. M. Mani remembrance meet organised by the Kerala Congress (M) Kottayam district committee in association with a citizens’ forum here on Monday.

“Raising the slogan ‘development and care’, the previous UDF government had implemented development projects extensively including the Kochi metro, Kannur airport, and Vizhnjam port during its five years tenure. “A Finance Minister may always be rigorous in his character and needs to say ‘no’ to many of the demands. However, Mani had been always benevolent and had provided all what the Cabinet asked.

Yet, the treasury never had to be closed. Mani’s skills as a financial manager and visionary made all these possible,” he said.

On the occasion, Mr. Chandy also referred to the various welfare projects initiated by Mani,including the Karunya Benevolent Scheme project, Rubber Production Incentive Scheme which ensured rubber farmers ₹150 per kg for rubber and so on. “The UDF government could also release the DA for government employees without any arrears. Even though, Teachers’ Bank was an initiative that caused a huge financial burden for the government, Mani could well manage it,” Mr. Chandy said.

Speaking on the occasion, KC (M) working chairman P. J. Joseph said he never made personal comment against Mani during and before associating with Mani.

Mr. Mani, who owns many records in Kerala politics, served the people with compassion and benevolence, he said.