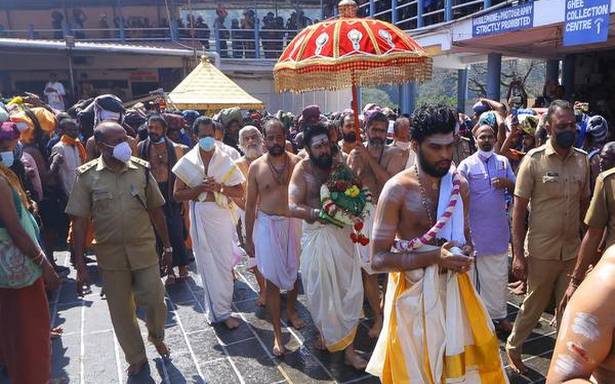 The Ayyappa temple will remain closed till 5 p.m. on December 30

Marking the culmination of the 41-day annual Mandalam pilgrim season in Sabarimala, Mandala Puja was performed at the Ayyappa temple here on Sunday.

The rituals during the day were led by the chief priest (Tantri), Kandararu Mahesh Mohanararu, and the head priest (Melsanthi) N. Parameswaran Namboothiri. The Mandala Pooja was performed between 11.50 a.m. to 12.40 p.m. Prior to the Mandala pooja, the presiding deity was adorned with the Thanka Anki, a golden attire that had been brought to the temple in a ceremonial procession.

The Ayyappa temple will remain closed till 5 p.m. on December 30 and the devotees will be permitted from December 31 onwards. According to the Devaswom Minister, the pilgrims will be permitted to ascend the Sabarimala through the forest routes from Erumneli and Vandiperiyar.

Those travelling from Erumeli between 5.30 a.m. and 10.30 a.m. will be allowed to travel through Azhuthakadavu. Only 10,000 people, who have registered in the virtual queue system, will be permitted to take the route on a daily basis.

Meanwhile, the path from Pullumed to Sabarimala has already been restored while directions have been issued to clear the remaining portion from Sathram to Pullumedu by December 30.

In view of the entry of pilgrims, medical facilities along these routes will be augmented, besides the provision for electricity and drinking water. The Petta Thullal at Erumeli will be held on January 11 while the customary procession carrying the Thiruvabharanam to Sabarimala will set off from Pandalam a day later.

The Ayyappa temple will be closed after the customary holy darshan that permitted the royal representative exclusively on January 20 morning.