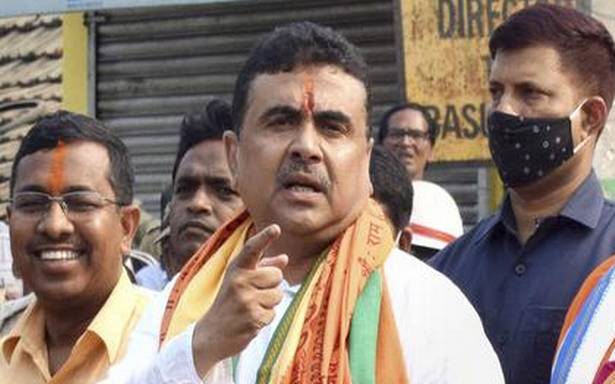 The Union Home Ministry issued a show-cause notice to Bandyopadhyay on May 31, the day he retired, for allegedly violating the Disaster Management Act by not attending a meeting called by Prime Minister Narendra Modi.

BJP leader and Leader of Opposition in the West Bengal Assembly, Suvendu Adhikari on Wednesday June 2, 2021, alleged that the Mamata Banerjee government is desperate to shield former chief secretary Alapan Bandyopadhyay, who was show-caused by the Centre, as he is aware of the "irregularities" of Covid-19 management in the state.

The Union Home Ministry issued a show-cause notice to Mr. Bandyopadhyay on May 31, the day he retired, for allegedly violating the Disaster Management Act by not attending a meeting called by Prime Minister Narendra Modi.

Mr. Bandyopadhyay, who was appointed as the Chief Advisor to the Chief Minister after his retirement as the Chief Secretary, became virtually inseparable from the ruling dispensation in the State during the last two years, Mr. Adhikari claimed while talking to reporters after meeting Governor Jagdeep Dhankhar at Raj Bhavan.

The Trinamool Congress, on the other hand, claimed that the BJP targeted Mr. Bandyopadhyay as he was working for the people of West Bengal and the saffron party wanted to teach the people of the state for voting in favour of the TMC in the recent assembly election.

He claimed that the violence unleashed by the TMC after the election is showing no signs of abatement and thousands of BJP activists still could not return home.

Mr. Adhikari said he urged the governor to visit the places affected by violence after the Covid-related restrictions are lifted.

Trinamool Congress spokesperson Kunal Ghosh claimed that Mr. Adhikari, who joined the BJP from the TMC in December last year, is making all kinds of false charges against the ruling dispensation and officials as he is accused in cases and wants to shield himself from central agencies like CBI

06/03/2021 India Comments Off on Mamata shielding Alapan as he knows irregularities of TMC govt: Suvendu
India