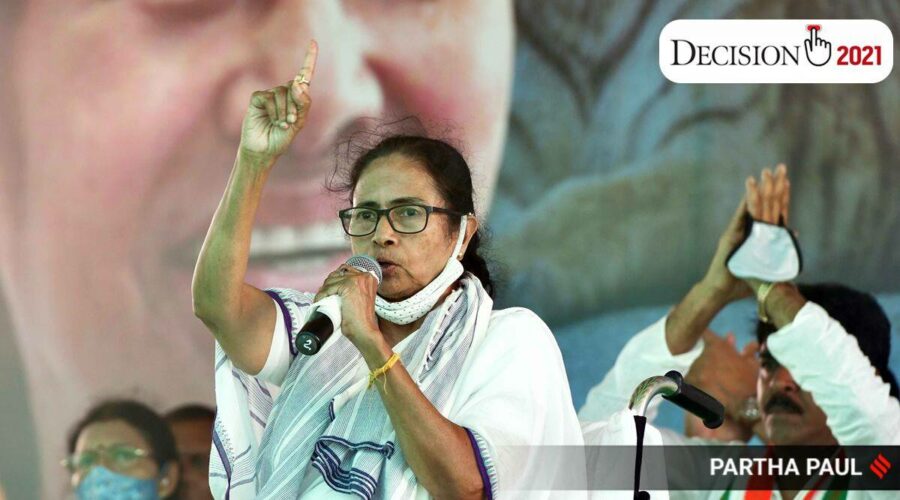 West Bengal Chief Minister Mamata Banerjee also stated she has received at least 100 complaints of assault and violence since morning, and the EC has been duly informed but to no avail. West Bengal Chief Minister Mamata Banerjee on Tuesday claimed that central forces “assaulted” voters in several constituencies where polling was underway, “instructing” them to vote for the BJP.

Addressing a public meeting here in Alipurduar district, the TMC boss accused the Election Commission of turning a blind eye to the “excesses” of the CRPF, CISF, BSF and the ITBP.

“They are beating and torturing people since morning. They are saying ‘BJP ko vote do’ (vote for the BJP),” the chief minister said.

She said her party’s nominee in Arambagh, Sujata Mondal, was chased and hit on head near a polling booth by saffron party workers.

“BJP supporters inflicted serious injury on our Scheduled Caste candidate Sujata, when she visited a booth. They also hit another candidate in Khanakul.

“In Canning East, security forces prevented our nominee Shaukat Mollah from entering a booth. There have been numerous such instances of attack on our candidates and workers across the state,” Banerjee said.

The CM also stated she has received at least 100 complaints of assault and violence since morning, and the EC has been duly informed but to no avail.

Alleging that a deep-rooted conspiracy has been hatched by the BJP leadership in Delhi after experiencing “poor turnout” in rallies, Banerjee said “security forces have been asked not to resist booth capturing”.

“They have asked the CRPF to help BJP goons to capture booths. The BJP is running elections through guns. Even Donald Trump has not gone to the extent of Narendra Modi,” she said.

The BJP denied the charges, maintaining that the allegations were baseless and bereft of truth.

Banerjee asked women voters to file police complaint if they face any harassment by central forces.

“Seven-eight persons, four of them our activists, have been murdered since the elections began, but no action has been taken. But, you (BJP) cannot terrorise us, intimidate us by such acts,” the TMC chief said.

Accusing the BJP of spending huge amounts of cash, she said while her party uses only one or two choppers, it puts to use not less than 500 helicopters to ferry leaders from one point to another.

“They have booked all the big hotels, offering cash to the voters. Where did this money come from – PM Cares Fund, sale of PSUs or demonetisation?” she said.

At another meeting in Coochbehar’s Mathabhanga, Banerjee said Modi and Home Minister Amit Shah have little connect with Bengal. “They are from Gujarat. How much do they know about the culture and heritage of Bengal?”

“I am a Brahmin who eats food cooked by a woman belonging to a backward caste. The BJP only knows how to bring food from five star hotels and eat it in front of the camera at the homes of lower caste people,” the CM said.

The BJP is a party of rioters “involved in communal killings in Gujarat, Delhi, Assam, Uttar Pradesh… and is now dreaming to capture Bengal”, Banerjee added.