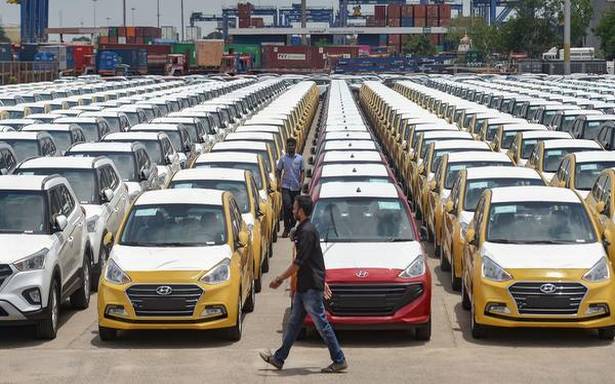 Sales in April this year are not comparable with that of the corresponding month a year ago as companies had reported zero sales due to the nationwide lockdown imposed to curb the outbreak of the COVID-19 pandemic in the country.

The country’s largest carmaker Maruti Suzuki India (MSI) reported a 4 % decline in total sales to 1,59,691 units in April as compared to 1,67,014 units in March this year.

HMIL Director (Sales, Marketing and Service) Tarun Garg said, “In these challenging times, we stand in solidarity with the nation and are continuing all efforts to support the affected… While our efforts presently focus primarily on supporting the lives and livelihood of people, we have also received positive sales results in April 2021”.

Likewise, homegrown auto major Tata Motors said its passenger vehicle sales in the domestic market stood at 25,095 units in April, down 15 % from 29,654 units in March this year.

However, compatriot Mahindra & Mahindra said its passenger vehicles sales in the domestic market stood at 18,285 units last month, up 9 % from 16,700 units in March 2021.

“With the increase in lockdown restrictions in many parts of the country, we foresee continuing supply chain-related production challenges. While demand remains good, there would be some impact in the first quarter as a result of low customer movement and dealership activity due to the lockdown restrictions,” M&M Chief Executive Officer Automotive Division Veejay Nakra said.

In times like these, the company’s focus is the well-being and safety of all its associates and dealers, he added.

Honda Cars India also reported a 28 % increase in its domestic sales to 9,072 units last month as compared to 7,103 units in March this year.

“The current health calamity has struck the entire nation and at this time nothing is more important than the health and well-being of our countrymen. Of course, it has had an impact on the business and deliveries in the marketplace,” Honda Cars India Senior Vice President and Director (Marketing & Sales) Rajesh Goel said.

“Despite the challenges, we continue to witness good demand owing to personal mobility needs and the same has helped us clock 9,622 units of wholesales in the month of April 2021,” TKM Senior Vice President Naveen Soni said.

Kia India reported a 16 % decline in dispatches to dealers to 16,111 units in April compared to 19,100 units in March this year, while MG Motor India said its retail sales last month stood at 2,565 units.

MG Motor said its production and vehicle dispatches to dealers last month was significantly higher than retail sales although it currently has an order backlog of over three months across its product lines.

With the second wave of COVID-19 leading to a surge in infections, the company has joined hands with Vadodara-based Devnandan Gases to help it increase the production of oxygen for medical usage.

“In these times, our efforts are directed towards keeping people safe and maximising service to the communities,” MG Motor India President and Managing Director Rajeev Chaba said.