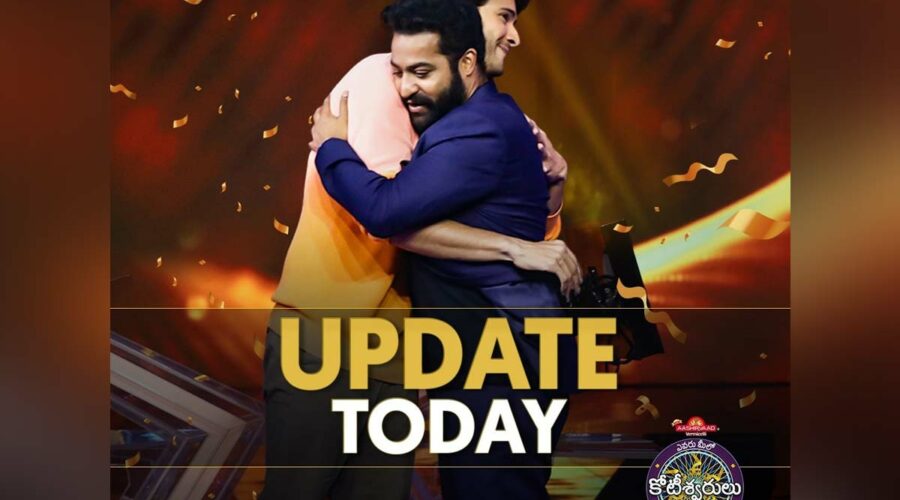 After hosting the controversial reality show Bigg Boss 1 Telugu, young Tiger Jr NTR made his comeback on small screen with the show EMK, which is winning the hearts of the TV lovers. The makers of Evaru Meelo Koteeswarulu- EMK are leaving no stone unturned to sustain its viewership. According to the latest report, Telugu superstar Mahesh Babu is going to grace Jr NTR hosted EMK show as a special guest.  Bharat Ane Nenu fame actor has won Rs. 25 lakh in the special episode, sources close to the show reveal.

Mahesh Babu has shot for the episode on 19th September in the grand set built-in Annapurna Studios.  And  the makers are going to share the update of Mahesh Babu’ episode  today.

The makers uploaded a special poster featuring the two handsome actors  Jr NTR and Mahesh Babu hugging each other. While the excitement about this special episode is at its peak, reports suggest that  Mahesh Babu will also be promoting his upcoming big budget film Sarkaru Vaari Paata co starring National award winning actress Keerthy Suresh, in EMK.

The sources say that Mahesh Babu will be asked 13 questions and finally, he will take home a whopping case prize of Rs 25 lakh.

Gala affair: Mahesh Babu and Jr NTR to come together

11/22/2021 India Comments Off on Mahesh Babu and Jr NTR hug each other at EMK Show, Telecast update today
India