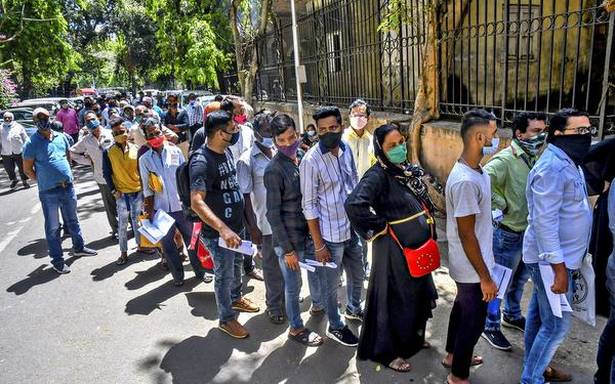 Maharashtra posted its second-highest single-day spike ever on Wednesday, reporting a surge of 39,544 new COVID-19 cases as its active case tally breached the 3.50 lakh mark to reach 3,56,243.

An alarming fatality spike of 227 deaths (129 of which were reported in the last 48 hours while the rest were from an earlier period) pushed the death toll to 54,649.

“Of a total 1,96,25,065 laboratory samples tested thus far, 28,12,980 (with the average case positivity rising to 14.21%) have returned positive with over 1.67 lakh samples being tested in the last 24 hours,” State Surveillance Officer Dr. Pradeep Awate said, adding that the State’s case fatality rate had incrementally dipped to 1.94%.

Given the increased emphasis on testing, Health Minister Rajesh Tope announced on Wednesday that the rates for COVID-19 tests performed in private laboratories in the State had been revised once again and that henceforth, only ₹500 would be charged for RT-PCR testing.

In addition, the rate of rapid antigen antibody testing has also been reduced to ₹150.

“Against the backdrop of increased cases, the State government has been continually revising rates of testing in private laboratories. It has so far revised the rates of these tests at least five to six times — from ₹4,500 to ₹500,” Mr. Tope said.

As per a directive issued on Wednesday by the State Health Department, revised rates of ₹500, ₹600, and ₹800 have been fixed for RT-PCR tests.

Pune district clocked a record surge of more than 8,500 new cases to take its total case tally to 5,36,262. As per the State Health Department figures, 31 deaths were reported as the fatality toll rose to 8,325. As per district authorities, the active case tally has crossed the 62,000 mark while the death toll is nudging 10,000.

Cases continued to mount in the Mumbai Metropolitan Region, with the Kalyan-Dombivli civic body recording 913 cases to take its total tally to 83,813. No deaths, however, were reported.

Nagpur district in Vidarbha added more than 3,000 cases as its total cases climbed to 2,30,187 of whom 46,333 are active. As per the State Health Department figures, the district reported 49 deaths to take its fatality count to 3,859.

Dr. Awate said that currently, 17,29,816 people across the State were in home quarantine and 17,863 were in institutional quarantine facilities.