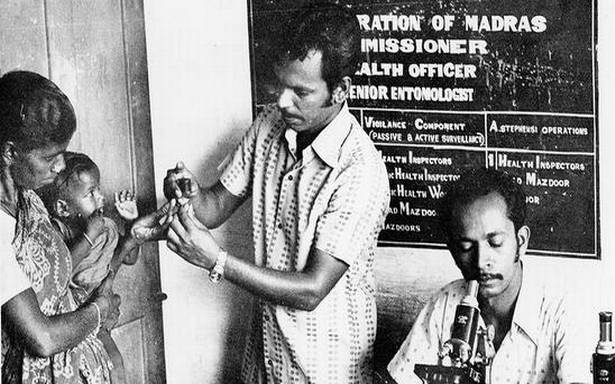 Wherever we go, there it is. The COVID-19 pandemic has overwritten several scripts, laid to waste the plans of everyone. And this year, as the city celebrates Madras Day, in commemoration of a pact inked 382 years ago, it makes sense to anchor the overarching theme to the disruptions a pandemic causes. For a week from now, these columns will open a window to the past to examine aspects of the city that are in some way connected to such disruptions. While Madras Day events are low key and the usual pomp and frenetic activity that Chennaiites see during this week in August are missing, people have taken the online route out, as with most things these past couple of years. For Chennai is still a city that its residents love, and harking back to its connect with good ol’ Madras is an annual ritual that has come to stay

“Members of the public are further warned to avoid exposing themselves to the infection by attending theatres, cinemas and other places of public resort,” reads part of a note issued by K. Raghavendra Rao, Health Officer of the Corporation of Madras, in October 1918 when Spanish Flu ravaged the city. If the period was not mentioned, the note can easily be mistaken for a statement issued by the current City Health Officer of the municipal body, which has since become the Greater Chennai Corporation (GCC).

Its striking similarity to the advisories issued amid COVID-19 aside, the note, which was part of the detailed statements issued by the then Health Officer through newspapers, underscores the role played by the Public Health Department of the city, which was among the worst affected in India during both pandemics. The Department has tackled at least three pandemics since the 20th century — the Spanish Flu of 1918, the influenza pandemic of 1957 and COVID-19 — besides the outbreaks of malaria, dengue, cholera, filaria, plague and other diseases.

Owing to Chennai being the only place in the State where the district is coterminous with the municipal corporation, the civic body takes precedence in the administration of the city. Unlike other districts where the Deputy Directors of the Health and Family Welfare Department play an important role, it is the GCC’s Public Health Department that handles health-related matters of the entire Chennai. The post of Health Officer was created in 1892, over two centuries after the Corporation was formed in 1688, when its limit was just around 10 km from Fort St. George. The city’s first maternity care centre was opened in 1917. Over the years, the title of Health Officer changed to Chief Health Officer and the Department underwent a tremendous transformation in its administrative set-up and ambit of work, with the city’s population increasing more than 16 times from what it was a century ago and its area expanding to 426 sq. km.

B. Dhanraj, retired Chief Vector Control Officer who served the GCC from 1967 to 2007, recalls the cholera control work he carried out soon after he joined duty. “The whole Corporation had just three vehicles — one for the Commissioner and two for inspections. I remember visiting the Communicable Diseases Hospital at Tondiarpet every morning to get the addresses of patients and visiting their areas in a left-hand drive jeep.” “If we finished with the list early, we would visit nearby police stations to make a phone call to the hospital to find out whether any new patient had reported during the day,” he says.

Today, a cursory look at the list of work under the purview of the Public Health Department shows that it is arguably the largest of the 17 Departments in the GCC. The Department, which derives its responsibilities and powers from the Chennai City Municipal Corporation Act and the Tamil Nadu Public Health Act, handles the implementation of State and national health programmes, birth and death registration, control of communicable and non-communicable diseases, vector control measures, urban primary health centres, veterinary public health, maternal and child health, burial grounds and ‘Amma Unavagam’. “Even conservancy work and control of food adulteration were once under its purview. However, they were moved out later,” Mr. Dhanraj says.

P. Kuganantham, a retired Chief Health Officer, says the Corporation was a pioneer in adopting best practices in public health. He recalls the steps taken after a new strain of Vibrio cholerae was identified in the early 1990s, in collaboration with the Chennai Metropolitan Water Supply and Sewerage Board. “We adopted the principles John Snow [renowned epidemiologist] followed for cholera control in the U.K.,” he says.

Highlighting that Chennai was one of the first cities to issue birth and death certificates online, he adds that some of the strategies followed in 2011 to control dengue, malaria and other vector-borne diseases were helpful in COVID-19 management.

Mr. Dhanraj says COVID-19 highlighted the strengths of the Public Health Department, besides some of its weaknesses. He calls for streamlining the responsibilities of the officials to meet the present requirements and feels the contractualisation of large sections of the workforce may affect the Department. As with the city’s achievements in public health, a sentence in the Health Officer’s report submitted in 1919 by the same Dr. Raghavendra Rao still rings true. “When all is said and done, there remains the important question of providing the people with the primary necessaries of life, viz., good and sufficient food to eat, wholesome water to drink, and sanitary houses to live in, suitable parks and grounds to roam and play in,” he says. Have we achieved them fully?