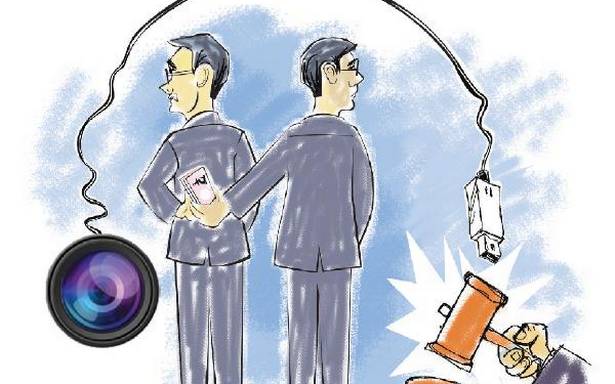 In a judgment that will encourage the Karnataka Lokayukta police to use spy cameras in bribery cases before registering First Information Reports (FIR), the Supreme Court has said that the Lokayukta police providing spy cameras to complainants to record conversations with public servants who demand bribe is only part of the “preliminary inquiry”, and does not amount to starting investigation without registering an FIR.

A Bench of the Supreme Court comprising Justice Dhananjay Y. Chandrachud and Justice Hemant Gupta delivered the verdict while setting aside the Karnataka High Court’s April 24, 2017, judgment on an appeal filed by the Lokayukta police.

The High Court had quashed the bribery case registered in 2012 against M.R. Hiremath, who was then Deputy Commissioner (Land Acquisition) in the Bangalore Development Authority, for lack of evidence to establish the allegation of demand for ₹20 lakh bribe for releasing denotified land in favour of the owner and acceptance of a portion of bribe amount.

It was argued before the apex court on behalf of Mr. Hiremath that the exercise of the investigating officer handing over a spy camera to the complainant on November 15, 2012, amounted to illegal commencement of investigation sans registering an FIR as per the parameters prescribed by the apex court.

However, the Supreme Court noted that the Lokayukta police had handed over the spy camera to the complainant a day prior to registration of the FIR [registered on November 16, 2012] for recording conversation with the accused officer, and this stage does not represent the commencement of the investigation.

“At that stage, the purpose was to ascertain, in the course of a preliminary inquiry, whether the information which was furnished by the complainant would form the basis of lodging an FIR. In other words, the purpose of the exercise which was carried out on November 15, 2012, was a preliminary inquiry to ascertain whether the information reveals a cognisable offence,” the Supreme Court said.

The apex court did not agree with the High Court’s finding that the prosecution of Mr. Hiremath was liable to fail as the Lokayukta police, along with the charge sheet, had not produced a certificate for leading secondary evidence of an electronic record, and other materials against him were “unconvincing”. The apex court said the High Court ought to have been cognisant of the fact that the court, while considering plea for discharge, must proceed on the “assumption that the prosecution material is true and evaluate the material in order to determine whether facts emerging from the material, taken for face value, disclose the existence of the ingredients necessary to constitute the offence”.