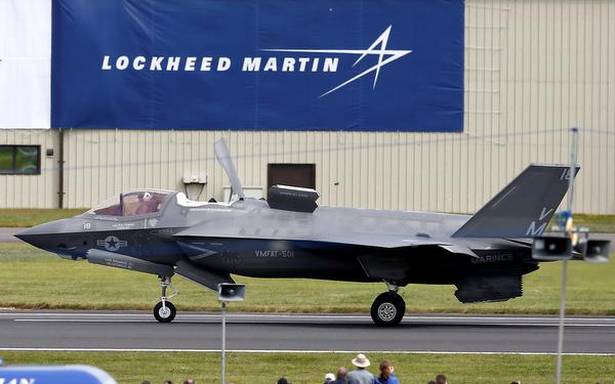 Lockheed has already tied up with the Tata group.

American aerospace major Lockheed Martin on Sunday said it is ready to address India’s requirements for new-age military solutions in the domains of land, sea, space and cyberworld in sync with the robust framework of fast-expanding Indo-US strategic ties.

William Blair, the Vice President and Chief Executive of Lockheed Martin’s India operations, said the company is "well placed" to partner with Indian entities in areas of unmanned platforms, artificial intelligence, quantum computing and machine learning among others.

He also pitched Lockheed’s F-21 aircraft, specifically configured to meet the IAF’s needs, as the best option in the force’s hunt for 114 combat jets.

Mr. Blair said the company will focus on the highest level of indigenisation in the plane and set up a production facility in India for the export market as well if it gets the contract.

Lockheed has already tied up with the Tata group to manufacture the aircraft in India and promised not to sell the F-21 to any other country provided it secures the multi-billion dollar deal.

"We are already mobilising actively through our joint ventures to establish capability and to start delivering in advance of requirements just as we did in the case of the C-130J programme," Mr. Blair told PTI in an interview.

"Simply put, it is actually going to meet and exceed the requirements as we believe in the highest level of indigenous content and the exclusive production-line will open up the greatest potential for exports. I think it is going to be unmatched," he added.

The company held a two-day conference with around 300 of its suppliers and partners in Bengaluru last week as part of efforts to further expand its overall involvement in India’s aerospace and defence sector.

Over two years back, the Indian Air Force issued an RFI (Request for Information) or initial tender to acquire 114 jets at a cost of around $ 18 billion, billed as one of the world’s biggest military procurement in recent years.

Mr. Blair said Lockheed is also looking to partner with Indian companies to meet the country’s requirements of new-age military solutions and platforms in the domains of land, sea, space and cyberworld.

"I can’t talk about any specifics right now but, of course, we would like to meet whatever the upcoming requirements are," he said.

In view of the myriad security challenges facing India, the country’s top military planners have been focusing on acquiring next-generation technologies and products such as drones, robotics, artificial intelligence and quantum computing to boost the overall combat capabilities of the armed forces.

"I think India can really leapfrog going forward in the areas of artificial intelligence, machine learning, quantum computing, cyber and space. India has really an edge there," he said. Mr. Blair indicated that Lockheed is ready to look at addressing India’s requirements including integrating existing systems and platforms with new generation applications that should be in line with provisions of the U.S. regulations.

He also referred to an overall upswing in the India-U.S. strategic ties and said the signing of foundational pacts such as LEMOA (Logistics Exchange Memorandum of Agreement), COMCASA (Communications Compatibility and Security Agreement) and BECA (Basic Exchange and Cooperation Agreement) paved the way for deeper defence cooperation between the two sides.

"I have never seen before both the promise and pace of real progress that has actually been built on those foundational agreements," the top executive said. "The proactive engagement with the ministry of defence, the services, the consultations that occurred to shape and understand capabilities and align requirements across multiple domains are really unprecedented in my view," he said Mr. Blair said Lockheed Martin has set up a strong foundation in India over the last 30 years, becoming part of the country’s aerospace and defence ecosystem. "That foundation sets us up well to meet not just the current requirements and support and sustain the platforms that are operating but also to meet the future requirements that are just emerging whether they are fighters, helicopters and ship-based systems," he said.