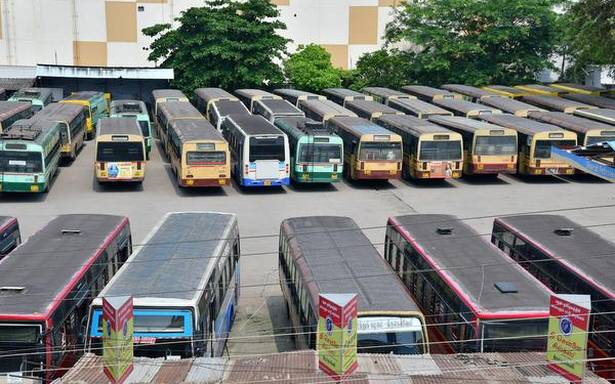 Except for hospitals and a few pharmacy outlets, the usually crowded vegetable markets and places of worship in Tirunelveli town and peripheries wore a deserted look.

Tirunelveli city police used drone cameras for surveillance, and vehicle checks were conducted in many locations including Vannarpettai and junction.

People from outstation experienced difficulty in reaching home in the early hours as some auto drivers reportedly refused to ply since they apprehended trouble from police while returning to their stands.

The usually busy Vannarpettai, Tiruvalluvar two-tier bridge, Junction and Thiruvananthapuram bypass were deserted due to the lockdown call from the State government to prevent spread of COVID-19 pandemic.

The buses of Tamil Nadu State Transport Corportation remained in depots and only emergency ambulance services were moving in the city. Though a few big temples were venue for weddings on Sunday, a majority of the families cancelled or postponed the marriages.

Conservancy workers were engaged in cleaning the two-tier bridge near the junction as there was no vehicle movement.

The Vivekananda Rock, which is a major tourist spot, was indefinitely closed and ferry service had been cancelled due to the pandemic.

The district witnessed steady rise in positive cases over the last week.

A large posse of police ensured absolutely no movement of unwanted motorists on the road. Only essential services were allowed on the roads from Kanniyakumari to Kaliyakavilai, a police officer said

Besides markets, Anna bus stand at Nagercoil, Vadaserry bus stand, Thuckalay, Kaliyakavilai, Colachel and Karungal too remained quiet as there were no services due to lockdown.

The Tirumala-Tirupathi-Devasthanam-run Venkateswara temple too was deserted. Usually, a large turnout would be witnessed on muhurtham and weekends, an official said.

With Courtallam, the most famous tourist spot in the district, shut for public entry long ago, Tenkasi remained calm on Sunday. The overnight rain in Shencottah and parts of Gundar too kept residents indoors.

High mercury levels in Surandai and other parts of the district during the day came in handy for police to control vehicular movement from and to Kerala. The usually busy check posts that handled movement of cars and cargo to Kerala were free due to lockdown.

Hospitals and emergency services functioned smoothly. The COVID-19 patients in the district came in for admission during the day, doctors at GH said.