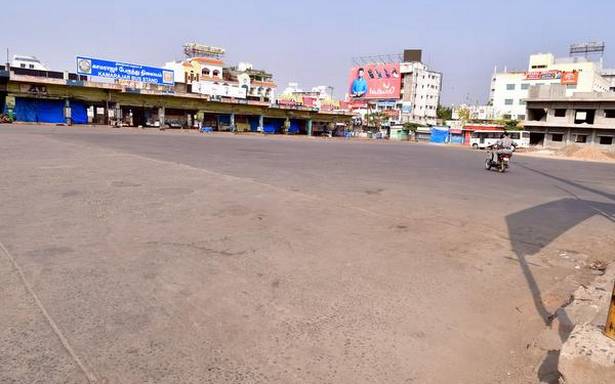 The Sunday lockdown in the district was complete as residents remained indoors. Vehicular traffic to tourist spots like Kodaikanal, Sirumalai and Palani among others was suspended.

Apart from the emergency services and hospitals, food delivery boys were seen moving near the AMC Road.

In the morning, when some youth were moving in the bikes near Main Road, the police imposed fines after their response was not convincing or genuine. The bikers were not wearing face masks, a health department official said.

The Kamarajar bus stand in the city was deserted and the bus depot was packed with the buses due to the lockdown.

In neighbouring Theni district, the district administration and the police had made elaborate arrangements to ensure that the lockdown was total.

According to the police, over 800 personnel were deployed at vantage locations, including the TN-Kerala border check posts in the district.

Other than essential services such as milk and dairy products, the trucks from Kerala, which were proceeding to destinations like Hosur were stopped at the check posts.

The covid-19 patients were admitted in the GH at Theni, Cumbum and but for the pharmacy outlets, roadside tea shops and uzhavar sandhais were completely shut down.

A Block Development Officer Rangarajan serving at Mayiladumparai in the district died at a private hospital on Sunday. According to officials, he was on deputation with a general observer during the polls.

The Pamban Road Bridge, fishermen hamlets along the coastal district remained calm on Sunday as the government had announced the lockdown.

The Superintendent of Police E Karthik said that public without reason shall not come to the roads. Only those with valid reason or genuine emergency shall be permitted.

The vehicle movement at Ramanathaswamy Temple and other shrines in the district was almost nil since the shrines were not open for the devotees.

Collector Dinesh Ponraj Oliver had issued broad guidelines for the shoppers and had appealed to them to stay indoors on Sunday. Only when the residents cooperate, the officials can focus on fighting the covid-19 challenges.

The lockdown was total in the district as the major markets in Sivaganga, Karaikudi, Tirupathur and other locations remained shut on Sunday.

The district, which remained at the bottom in southern Tamil Nadu in the covid-19 cases, was on high vigil at the check posts. The police officers were told to keep an eye on the arrival of people from overseas and other States like Maharashtra by road.

In Devakottai, there were a few weddings held. The hosts were told by the officials to confine the celebrations within the prescribed number and were held low-key.

The ambulance services and hospitals functioned as usual. The busy markets in Subramaniapuram in Karaikudi and jewellery outlets were shut. Buses did not ply and remained off the road. Hence, people from remote villages could not travel, police said.

Lockdown in Virudhunagar was total and went off smoothly on Sunday. All the shops and commercial establishments and markets remained closed.

Most of the roads wore deserted look with very few vehicles, including cargo vehicles carrying essential goods, moving around.

However, medical shops and hotels selling takeaways were allowed to remain open during the permitted hours.

Though police picketings were posted in important junctions to stop unnecessary movement of people, they allowed marriage parties to move in vehicles in limited numbers. Marriages that were planned weeks ago were conducted with limited attendance of guests at marriage halls and in front of temples.