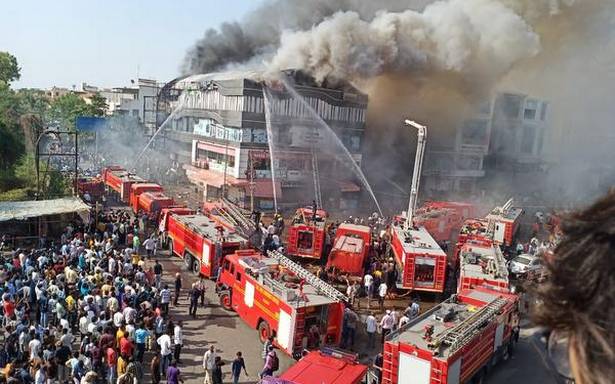 At least 17 students died in a massive fire in a commercial building in Surat. The students were attending their tuition class when the fire engulfed the area, supposedly due to a short circuit.  “Around ten students trapped on the third and fourth floors jumped from windows to save themselves from fire and smoke. Many have been rescued and sent to hospital. The operation to douse the fire is on,” said an official at the Surat fire control room.

Saddened by the loss of lives in Surat: Ahmed Patel

Congress leader Ahmed Patel appeals to local authorities to provide best possible medical relief to the injured and adequate compensation to families of the deceased. Mr. Patel also asked the authorities to ensure that fire safety measures in are in place across Gujarat. Expressing his condolences, Mr. Patel said: "My thoughts and prayers are with their families".

Union Home Minister Rajnath Singh on Friday expressed his condolences to the victims of the fire tragedy in Surat. "Deeply saddened by the loss of precious lives due to fire in Surat. My thoughts are with the families of the deceased. I pray for the speedy recovery of the injured", Mr. Singh said in a statement.

The fire that broke out in a commercial building in Surat on Friday was caused by short-circuit, sources said. There were more than 50 students in the tuition class when the tragedy occurred, the sources added.  More than a dozen students have been taken to hospital for treatment.

The building was reportedly not equipped with fire safety equipment. Meanwhile, Chief Minister Vijay Rupani has ordered an inquiry to be conducted by the urban development department. Mr Rupani also announced compensation of Rs 5 lakh each to the family of the deceased.

Prime Minister Narendra Modi on Friday expressed anguish over the fire tragedy in Surat and asked the Gujarat government and local authorities to provide all possible assistance to those affected.

“Extremely anguished by the fire tragedy in Surat. My thoughts are with bereaved families. May the injured recover quickly. Have asked the Gujarat government and local authorities to provide all possible assistance to those affected,” Modi tweeted

Several students were seen jumping off a commercial complex after it caught fire, officials said. Visuals on TV channels showed students jumping off the third and fourth floors of the building. Locals were seen helping in the rescue operation to save stranded students as well as other occupants of the four-storey building.

The fire engulfed the third and fourth floor of the Taxshila Complex here, the official said.

A fire official said 19 fire tenders and two hydraulic platforms were pressed into service to douse the fire.