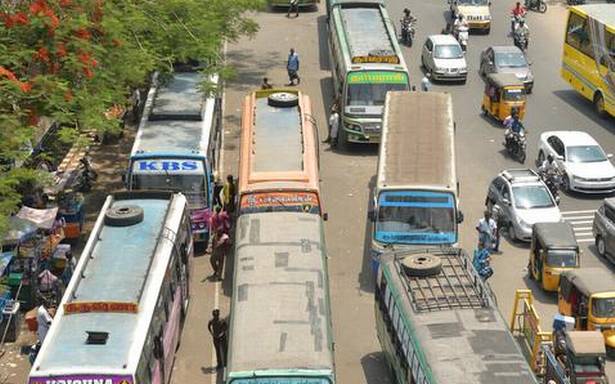 Several weeks have passed since the Tiruchi City Corporation awarded the contract of redevelopment of the much awaited Chathram Bus Stand under the Smart City initiative. But, the construction work is yet to commence due to a litigation in the Madurai Bench of the Madras High Court.

According to sources, the civic body has allotted ₹17.34 crore for the redevelopment of Chathram Bus Stand, a city terminus catering to commuters bound for different parts of the city and north-bound long distance destinations.

As many as 225 city buses, including 100 State owned transport corporation buses, have been operated from Chathiram Bus Stand, which is serving to the people since 1979.

As per the proposal, two terminals will be constructed at the bus stand. Each terminal will have 15 bus bays. In addition to them, the existing two-wheeler parking lot will be expanded to accommodate 350 vehicles.

There is also a move to construct a shopping complex and food court on the 2.05 acre bus stand complex. Construction of toilets for men and women, mother feeding room, luggage safety room and drinking water arrangements are part of the development plan. It has been planned to construct a waiting hall for the passengers.

The Tiruchi City Corporation, which had obtained administrative sanction from the State government in the third quarter of 2018, awarded the Chathram Bus Stand redevelopment contract before the Lok Sabha elections. But, the project is yet to take off apparently due to delay in vacating the stay granted by the Madurai Bench of Madras High Court.

A group of shopkeepers, who have shops on the Chathiram Bus Stand complex owned by the Tiruchi Corporation, have approached the High Court against the notice served by the civic body to vacate the shops to facilitate the development works.

The shopkeepers, in their petition, sought the intervention of the High Court by claiming that they were not sure about the allotment of shops once the development project was completed. They were dependent on the shops for their livelihood, they contended.

Tiruchi Corporation Commissioner N. Ravichandran told The Hindu that there were about 20 shops at Chathram Bus Stand and they were built during the erstwhile Tiruchi municipality period.

The site, where the shops were being functioned, was vital for the redevelopment project.

The shopkeepers had been served notice to vacate so as to commence the development work. But, a few of them had taken up the issue to the High Court.

The project was important to ease traffic congestion and chaos in and around the Chathram Bus Stand. The number of buses being operated from the bus stand had also gone up.

There was a need to construct more bays to accommodate all buses. Action had been taken to vacate the stay granted by the High Court.

The process would be expedited in the days to come, he added.