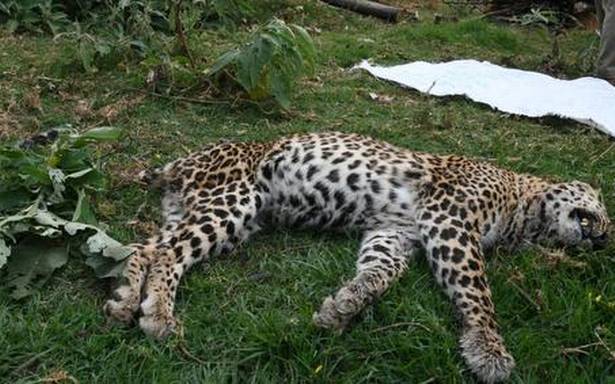 The 12-year-old animal is believed to have died of natural causes, Forest Dept officials said

A 12-year-old leopardess was found dead in Ketti in the Kattabettu Forest Range in the Nilgiris Forest Division on Wednesday.

Local residents, who spotted the carcass of the animal, informed the Forest Department, who rushed to the spot and began investigations to ascertain the cause of death of the animal. R. Selvakumar, Forest Range Officer, Kattabettu Range, said that on inspection by veterinary assistant surgeon, Rajesh Kumar, from Mudumalai Tiger Reserve, and other Forest Department officials, it was found that the animal’s canines had withered due to old age. “It had possibly been unable to hunt due to its age, leading to its death,” said Mr. Selvakumar.

A postmortem was conducted on the carcass of the animal by Mr. Rajesh Kumar. Also present was Mr. Parathasarathy, the Joint Director from the Department of Animal Husbandry in the Nilgiris, D. Venkatesh, Conservator of Forests (Nilgiris), Bhosale Sachin Thukkaram, District Forest Officer (Nilgiris division), members of various non-governmental organisations as well as Revenue Department staff.

When contacted, Mr. Thukkaram, the District Forest Officer, said that preliminary investigations pointed to the animal dying of natural causes. “We have collected samples of the animal’s visceral organs and have sent it for forensic analysis,” he added.