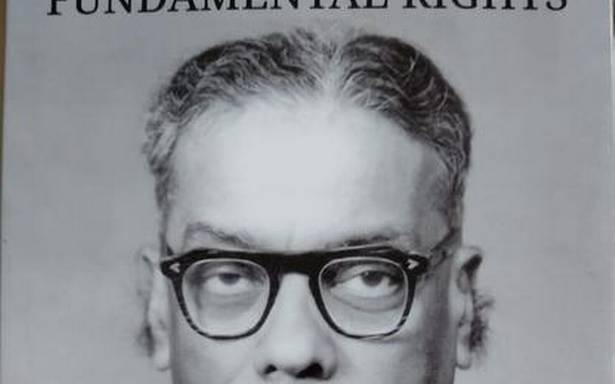 Barrister M.K. Nambyar, an illustrious lawyer of the Supreme Court and the Madras High Court, who died in 1975, pulled no punches when it came to defending the fundamental rights and basic structure of the Constitution.

It was he who laid the very foundation for the idea of the basic structure of the Constitution when he argued in the I.C. Golaknath v. State of Punjab case in the Supreme Court in 1967. He had contended that Parliament had no power to amend the fundamental rights under Part III of the Constitution.

He took the cue from the principle expounded by the German thinker, Dieter Conrad, in this regard. Since then, various facets of the basic structure doctrine have evolved through a slew of Supreme Court judgments. Nambyar believed that the struggle for Independence and the enactment of the Constitution had secured for the citizens the fundamental rights.

Later, in 1973, his stand was proved right when the Supreme Court stated in the Kesavananda Bharati case that Article 368 did not empower Parliament to alter the basic structure of the Constitution.

“Champion of Fundamental Rights”, a brief biography compiled by his sons, including Attorney General K.K. Venugopal, gives an account of Nambyar’s early life, including his birth in an affluent family at Kanhangad in Kasaragod, his education at Mangalore and the London School of Economics, and his successful legal career in Mangalore, Madras High Court, and the Supreme Court.

Nambyar’s appearance in 1950 in the A.K. Gopalan case, the first constitutional case in the country, catapulted him to the position of a constitutional lawyer, that too at the beginning of his legal practice in the Supreme Court after he shifted practice from the Madras High Court.

It was a case challenging the detention of Communist leader A.K. Gopalan. The case was one of seminal significance regarding the interpretation of fundamental rights and their interplay, former Attorney General late Soli Sorabjee has said in an article in Nambyar’s biography.

In the case, Nambyar had argued that procedural due process and principles of natural justice should be read into the expression “except according to the procedure established by law” in Article 21. However, it was only 28 years after that case that the Supreme Court accepted the argument and ruled in Maneka Gandhi’s case that the expressions meant a procedure “which is just, fair, and reasonable”. Sorabjee added that if Nambyar’s far-sighted arguments were accepted in the A.K. Gopalan case, it would have led to healthy development of the Constitutional law.

Late V.R. Krishna Iyer, former Supreme Court Judge, paid an apt tribute to Nambyar when he said, “There was a commitment about him in the garb of fundamental rights. He fought the case (A.K. Gopalan) not for the ideology of his client, who was a communist, but for the ideology of human rights which finds expression in Part III (of the Constitution).