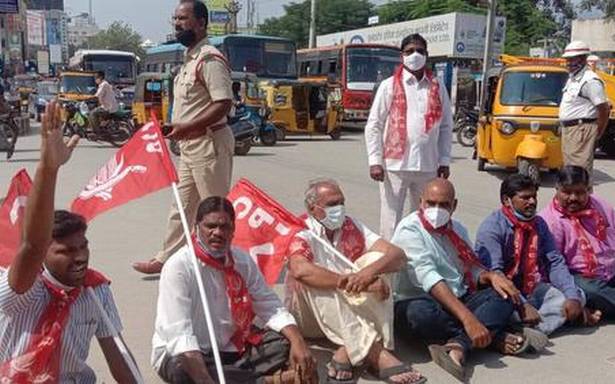 K. Narayana said that the Bihar elections had once again brought to the fore the importance of Left parties in adding strength to the anti-BJP fight

The Bihar elections have proved that the Left parties are gaining strength across the nation to become an indispensable force, though the BJP-led NDA came to power owing to irregularities, said Communist Party of India (CPI) national Secretary K. Narayana.

Addressing the media here on Sunday, he said that the elections had once again brought to the fore the importance of Left parties in adding strength to the anti-BJP fight. “In the future, every party in the country will see the advantage of having the Left parties by its side,” he said.

Mr. Narayana also predicted that the DMK alliance, with the CPI and CPI (M) in its fold, would win the ensuing Tamil Nadu Assembly elections hands down. He breathed fire at the BJP for “trying to win the elections by whipping up passions”, recalling that the saffron party was bent on projecting the Majlis Ittehadul Muslimeen (MIM) party as a ‘demon’. "I once again call upon all the parties in the Left spectrum, having belief in the parliamentary system, to come together to defeat the BJP", he appealed.

Mr. Narayana felt that much against the trend, the ruling YSR Congress party in Andhra Pradesh was unabashedly toeing the line of the BJP and had no qualms over playing the second fiddle, in spite of the ‘injustice’ meted out to the State. He wondered why the Y.S. Jagan Mohan Reddy government confined itself to writing letters to the Centre, which had gone back on its word on providing the rightful share of funds and projects after bifurcation.

Later, Mr. Narayana led the party cadre in staging a demonstration in the city, protesting against the detention of party leaders proceeding to Polavaram project site.