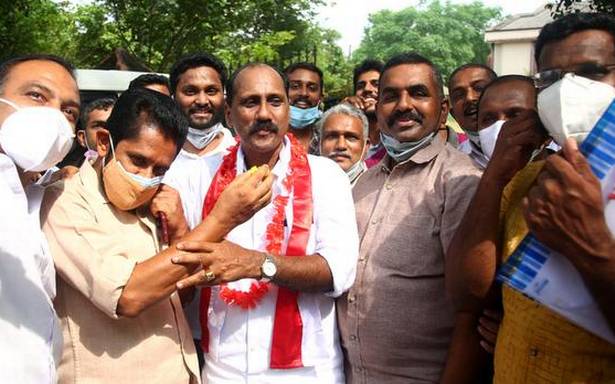 A shock defeat in Pala notwithstanding, the Left Democratic Front (LDF) has shown that the gains that it made in Kottayam- a United Democratic Front bastion for long, are far more durable than just a local body election.

The CPI(M)-led coalition, emboldened by recent inclusion of the Kerala Congress (M) in its fold, on Sunday won five out of the nine assembly segments in the district. The coalition had won just two seats – Vaikom and Ettumanur, in Kottayam during the Assembly elections five years ago though it went on to win Pala later during the 2019 byelection.

While C.K.Asha, a candidate fielded by the Communist Party of India (CPI), trounced P.R.Sona of the UDF by a margin of 29,122 votes to retain the Vaikom seat, CPI(M) district secretary V.N.Vasavan defeated Prince Lukose of the Kerala Congress by a thumping majority of 14,040 votes.

Kerala Congress leader Mons Joseph, who bagged 33,359 votes, edged out Stephen George of KC(M) by a margin of 4,256 votes. Senior Congress leaders Oommen Chandy and Thiruvanchur Radhakrishnan retained their seats of Puthuppally and Kottayam, though at a reduced margin.

In Changanassery, KC(M) leader Job Michael defeated V.J. Laly of the UDF by 6,059 votes to wrest the seat from the UDF. Despite a switching of sides to the LDF, N.Jayaraj of the KC(M) retained the Kanjirappally seat by a convincing margin of 13,703 votes.

In Poonjar, which witnessed its most tumultuous election ever following an open conflict between the sitting legislator and Kerala Janapaksham stalwart P.C. George and Muslim voters, former District panchayat president and KC(M) leader Sebastain Kulanthungal sailed through by a margin of 16,817 votes. Mr.Kulathungal bagged 41.94 percent of the total 1,28,624 votes polled to defeat Mr.George, who received just 29.92 percent votes.

The most significant among these was the outcome in Pala, where Mani C. Kappan handed a humiliating defeat to the KC(M) chairman Jose K. Mani.