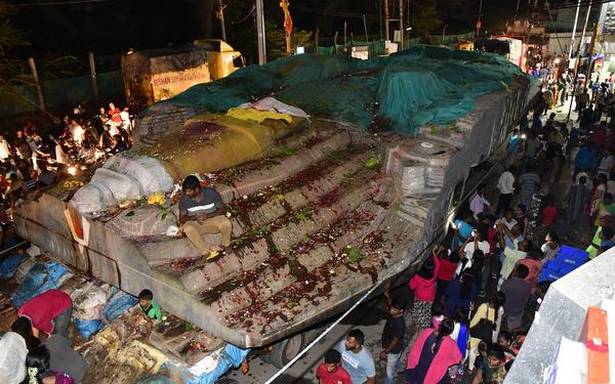 Over 35 electricity poles are being shifted, footpaths being cleared, and a few houses being demolished at Ejipura to make way for the 64-foot Vishnu statue that will be installed at Kothandaramaswamy temple in the area.

The statue, which has been carved out of a single rock at Korakottai village near Tiruvannamalai in Tamil Nadu, reached the Karnataka-Tamil Nadu border on Sunday night.

The idol of Vishwaroopa Mahavishnu, which weighs 300 tonnes, is being transported by a 240-wheel truck.

After a halt at Madiwala, it was parked close to the Viveknagar Police Station on Wednesday night.

After having traversed nearly 300 kilometres over six months, the last 4-km stretch through the congested, narrow bylanes of Ejipura is proving to be a hurdle.

Bescom officials said they were shifting the poles, and over 30 workers were being engaged. “It is a challenge, but we are doing it in two phases: 15 poles on Wednesday, and 20 more on Thursday. Electricity supply to houses of around 1,000 people has been cut, after informing them,” said a Bescom engineer.

Meanwhile, three small houses, which would be demolished as part of road widening, have been identified. The Kothandaramaswamy Charitable Trust, which is monitoring the project, will compensate the losses, said a member of the trust.

“Movement is happening only at non-peak hours and arrangements have been made for seamless traffic movement at night. The idol may reach the temple on Friday night,” he said.

While the statue was completed in 2017, transportation was delayed after activists took the matter to Madras High Court. Trust officials said the process was delayed further after the National Highways Authority of India refused to allow the truck to traverse two bridges on the Bengaluru–Chennai highway and alternative routes, including the diversion of a river at Hosur, had to be drawn out.