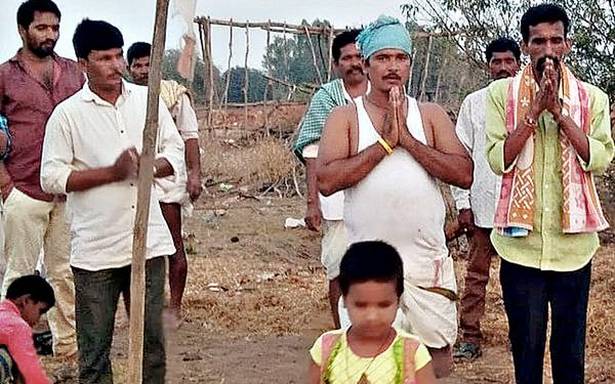 Pallepahad tanda residents to vacate in a day or two

For them it was the last time and forever. Another village will be added to the list of those who ‘sacrificed their lands, houses and villages’ to benefit other farmers.

The residents of Pallepahad tanda located in Toguta mandal performed last prayers for their community guru Santh Sevalal on Tuesday. More than 100 families participated in the ritual held in the village under the leadership of Goglaothu Raju.

First all of them held Homam as per their tradition to Sevalal. Later animals were sacrificed to Merama (Durga Mata). They had a community meal with the meat of the animals.

“For us, this will be the last time to perform puja for Santh Sevalal as our village will get submerged by Mallannasagar. We are holding the festival early as we have to vacate the village in the next one or two days, though the festival will be held in July as per out tradition,” Mr Raju told The Hindu.

The villagers were asked to vacate the tanda and they have sought permission from officials two days so that they can perform Sevalal Puja.

“Some of our tanda residents were shown houses at Rehabilitation and Resettlement colony. About 30 families are yet to get compensation. Officials are telling them that they would be paid compensation at a later stage. The villagers are reluctant to vacate the village but there is no alternative,” Mr Raju said.