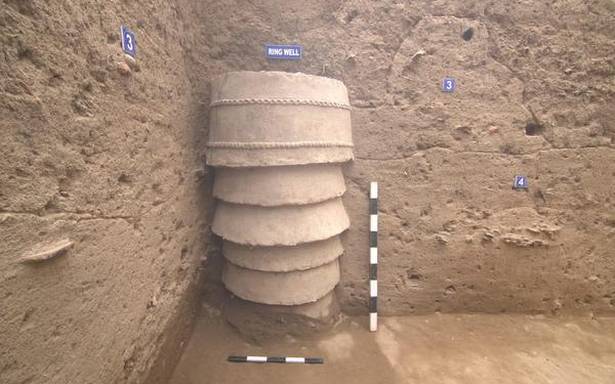 Two ring wells at Agaram, one at Keeladi mark the last lap of excavations

Unearthing of two new ring wells at Agaram and the completion of digging out a six-layered ring well at Keeladi main site are perhaps the last few surprises of the season as the archaeology staff prepare to wind up the seventh phase of excavation by this month end.

The large scale explorations in the cluster of sites, also including Manalur and Konthagai, 12 km southeast of Madurai, is being carried out by the Tamil Nadu State Department of Archaeology to establish the existence of an urban settlement on the banks of the Vaigai river more than 2,600 years ago.

In this round, the excavation at Agaram over two acres has yielded the highest number of ring wells. Four were excavated between February and August and two new ones were unearthed over the weekend. “We are yet to trace it fully for the full dimensions, only the upper portion of ring wells have been exposed so far, “ one of the officers at the site told The HIndu.

Of the two ring wells found at Keeladi this season, archaeologists have just completed the tracing of the first one that was exposed in July with a banded rope design in the top ring at a height of 44 cm. The ring well has now been traced up to a depth of 140 cm, with six rings interlocked one below the other. The seventh layer was found broken.

While the excavations at Konthagai led to unearthing of skeletal remains and 11 burial and storage urns, at Manalur and Keeladi main, the findings also included weavers tools, beads and bangles made of shell, glass, stone, terracotta and semi-precious stones and potsherds and indicated a flouring hub of trading activity during the Sangam Age.

The excavations in almost all the quadrants at the four sites have reached the bottom layer of natural soil, indicating no further trace of antiquities, said Deputy Director (Archaeology) R Sivanandam. The staff has now begun the documentation of approximately 1,200 artefacts unearthed in this phase.

The decision to fill the pits – measuring 15X18 feet and 4.5 metres deep – with soil at Keeladi as was done after the completion of previous rounds, is however, pending. Sources say with an on-site museum coming up soon, the excavated pits with the ring wells attached to the walls, may be kept open for public viewing as an added attraction.

The seventh phase of excavations began in Keeladi this February and coincided with the second season at the other three sites.