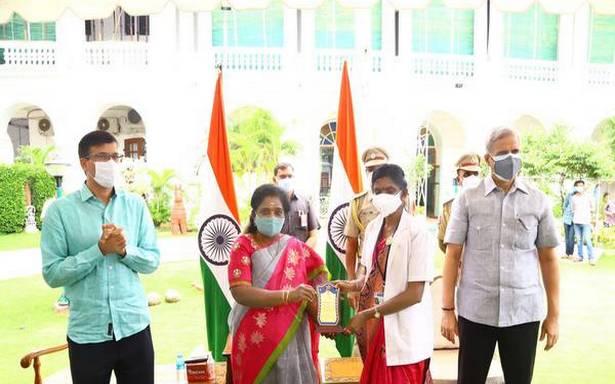 Inoculation has been relatively low in section of people aged above 60 years: Tamilisai Soundararajan

Lt. Governor Tamilisai Soundararajan on Saturday expressed concern over the below par patronage for vaccination against COVID-19 in spite of uninterrupted availability of vaccines and all out facilitation efforts taken by government departments.

After chairing a high-level COVID-19 review at the Raj Nivas, Ms. Soundararajan said it was a bit perplexing that about 40% of the population still harboured vaccine hesitancy in spite of the various awareness and outreach initiatives of the State.

Pointing to the measures taken by the administration such as street corner camps, rural camps, night-time sessions and 48-hour non-stop vaccination camps, the Lt. Governor said public patronage was important for effectively countering the pandemic no matter how much effort the government puts in for arranging vaccination or treatment facilities.

Given the scale of facilities organised across Puducherry on Saturday, over 10,000 persons should have been inoculated, though the actual numbers were far less, she noted. Ironically, while in many States, people were returning from session sites because of lack of vaccines, in Puducherry sufficient stocks had been maintained from day one of the vaccination effort, Ms. Soundararajan said.

In these circumstances, avoiding taking the protective jab was unforgivable, she said. She pointed out that only a fully vaccinated population could ward off the worst effects of a third wave of COVID-19. It also needed to be reiterated that vaccinated persons, who contract COVID-19, were not among those admitted in intensive care units. This fact is something that the public needed to understand and volunteer themselves for inoculation, the Lt. Governor said.

Ms. Soundararajan later told the media that the 25th review meeting had noted that while the 18-45 age group was getting themselves vaccinated, the coverage was relatively low in those aged above 60 years due to persisting hesitancy. It was also pointed out that an estimated 4% of COVID-19 patients at the Jawaharlal Institute of Postgraduate Medical Education and Research (Jipmer) were from adjoining districts in Tamil Nadu.

The Lt. Governor said there was no issue with keeping temples open or with allowing scaled down festivals as long as COVID-19 norms were followed. There had been no surge in cases because of this in Puducherry. There would be no additional restrictions barring the standard COVID-19 norms for the Vinayaka Chaturthi festival, she said.

The Lt. Governor also felicitated COVID warriors as a token of appreciation for selfless service during the pandemic. Children who won a painting competition based on a pandemic theme were also felicitated.