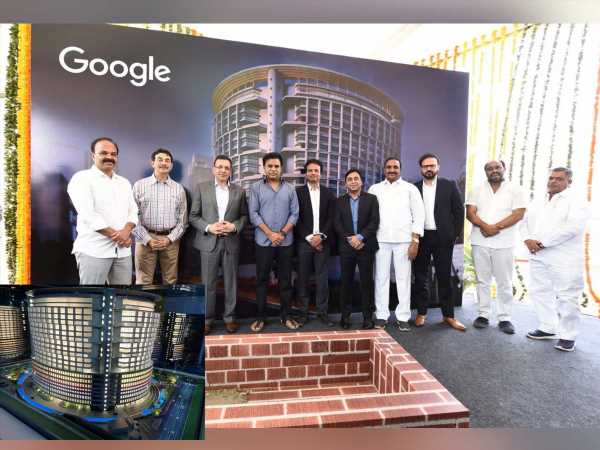 KTR-  the Telangana Information Technology Minister  said he was super excited to break the ground for Google’s largest campus outside of their headquarters at Mountain View, the US. A 3.3 Million sft energy efficient campus built with the  sustainability will stand as the  landmark for the capital city Hyderabad for decades to come. KTR thanked Google for the support.

KTR participated in the ground breaking ceremony of Google largest campus. The officials of Google were also present on this occasion during which an MoU was signed.

Google signed a MoU with the Telangana govt to support and accelerate its vision of leveraging technology for sustainable economic development and the inclusive social development.

On Thursday,  Google started work on largest campus outside of its headquarters in the United states. According to the latest report,  a 3 million square feet building is coming up at Gachibowli.  The company  also unveiled the design of the campus coming up at the 7.3 acre site it acquired in 2019.

Currently Google  operates out of a leased facility in Kondapur in the capital city  and employs about 7,000 people. The new campus, which was earlier expected to be ready in 2019, is likely to nearly double the headcount.

Google will also support  Telangana govt’ efforts to improve  the public transportation and use of digital technologies in agriculture.

04/28/2022 India Comments Off on KTR: Super excited to break the ground for Google largest campus in Hyderabad
India