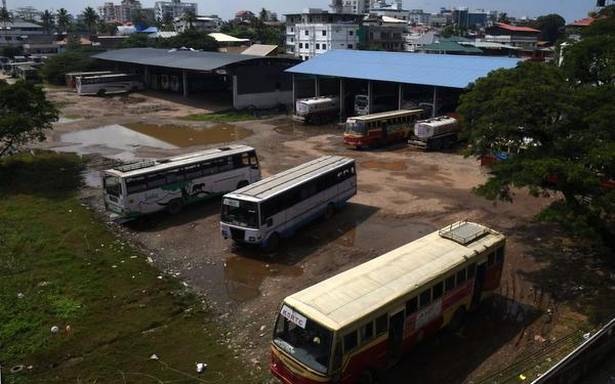 Faced with public outrage over the deplorable condition of the Ernakulam bus stand and its precincts, the Kerala State Road Transport Corporation (KSRTC) is in the process of finalising a plan to relocate the stand to its plot at Karikkamuri, following which dilapidated buildings at the existing stand will be demolished to pave the way for a multi-storied commercial structure.

The deteriorating condition of the stand has been a topic of discussion on social media and other platforms. Little maintenance was done at the bus stand during the past two decades, although the building housing the KSRTC office and waiting area for passengers and the adjacent restroom for bus crew were in a pathetic condition. A ₹2-crore modern garage that was readied a couple of years ago on the southern side developed severe cracks and fell into disuse even before it was commissioned.

“The premises and buildings getting flooded during the rains and the inflow of water from the adjacent Mullassery Canal during high tide almost every day have been a bane for employees and passengers. Only a comprehensive master plan and its prompt execution can improve the situation,” said a senior KSRTC official.

KSRTC Chairman and Managing Director Biju Prabhakar attributed the flooding to the premises being at a lower level than the surroundings. “The KSRTC alone cannot be blamed for this. Plans are afoot to ready a commercial complex that will replace the existing buildings on the 4.70-acre premises, while the stand will be relocated to Karikkamuri,” he said.

A panel of experts, including architects, is working on finalising plans to lease out the space for commercial use. The funds obtained from the leased land will be used to build the new bus stand building and related infrastructure, it is learnt.

The Human Rights Commission has repeatedly pulled up the KSRTC for the condition of its restroom. The agency had readied a pair of AC sleeper buses, each capable of accommodating 16 crew members, to ensure that employees get proper rest in between trips.

A sum of ₹1.50 lakh was allotted to improve the condition of the existing restroom, said Najibudeen K.A., district president of KSRTC Employees Association. “Work is under way using this money. KIIFB funds could come in handy to relocate the stand. The situation will improve further if proper road connectivity is established between the stand and the Ernakulam Junction railway station,” he said.