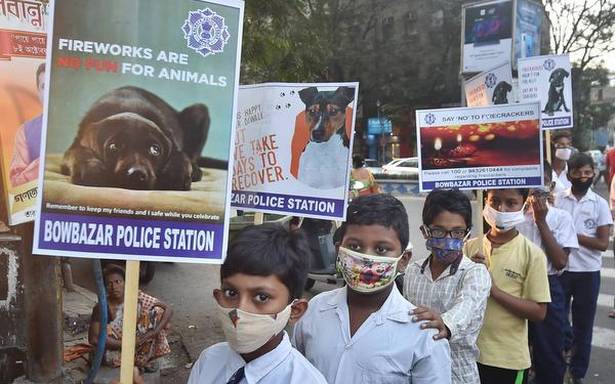 On the night of November 14 when Deepavali and Kali Puja were celebrated across the city, the Kolkata police tweeted the photograph of the city’s skyline in the evening which showed a well-lit Howrah bridge but no light from busting crackers. Kolkata and its neighbouring suburbs witnessed the quietest and cleanest Deepavali without air and noise pollution.

The figures of arrests and seizures of crackers released by the police on November 14 and 15 revealed that 708 persons were arrested and 1,771 kg crackers were seized. Compared to last year, the number of people booked for busting crackers had almost reduced by half. In 2019, 1,210 people were booked for bursting crackers. The complaints received on the helpline of the Pollution Control Board and NGOs were also significantly less compared to last year.

The Calcutta High Court had issued a ban on the sale and use of crackers almost nine days before the festival on grounds that a deterioration in air quality can lead to surge in the pandemic. The Kolkata police have also started an awareness campaign making announcements to people not to bust crackers.

The results have not only given a relief to the administration and law-enforcing agencies battling the pandemic but have surprised the NGOs and activists. The Paschim Banga Vigyan Mancha on Monday issued a congratulatory note to the people saying the manner in which they have stayed away from crackers is ‘exemplary’. The organisation working for inculcating scientific temper among people thanked the Calcutta High Court and administration for their efforts.

Naba Dutta, city’s well-known environmentalist, said while there were few complaints about busting fire crackers in Parnashree and Kasba, the other areas which were notorious for bursting crackers were completely silent.

In fact, the air quality in Kolkata turned poorer on Sunday evening though the festival was celebrated on Saturday. The index for the particulate matter (PM 2.5) was moderate at 108 Rabindra Sarovar air monitoring station in south Kolkata on Saturday at 8 p.m. On Sunday at 8 pm also it was moderate category but increased to 152.