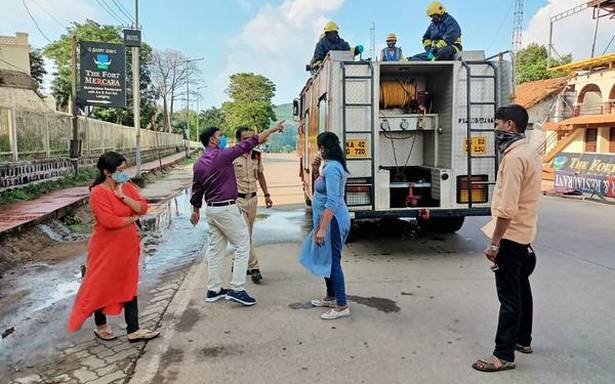 The COVID-19 situation appears to have reached an alarming stage in Kodagu, a small hill district, which on Saturday reported a highest-ever single-day spike of 548 cases, shocking district authorities. The health authorities are on an alert.

It is first time since the last wave that the cases crossed the 500-mark in the coffee land, which had successfully handled the pandemic along with flood crisis last year.

The highest number of cases were reported in Virajpet where 227 tested positive, followed by Somawarapet where 194 cases were detected. Madikeri reported 127 cases.

Kodagu DHO Mohan told The Hindu that this was the highest-ever single-day spike Kodagu had witnessed since the outbreak of the pandemic. “We had foreseen cases would cross 500 after May but the cases peaked now itself. People have to follow rules and go for vaccination otherwise it will be difficult to manage the situation,” he said.

A total of 600 beds had been added to the treatment of patients by opening three COVID-19 care centres in the district. “The number of oxygenated beds will soon go up in Somawarapet and also Virajpet as the work is under way,” he said.

The total number of positive cases reported so far in Kodagu were 8,200 and 6,603 were discharged. The active case tally stands at 1,506 and the number of dead was 91.