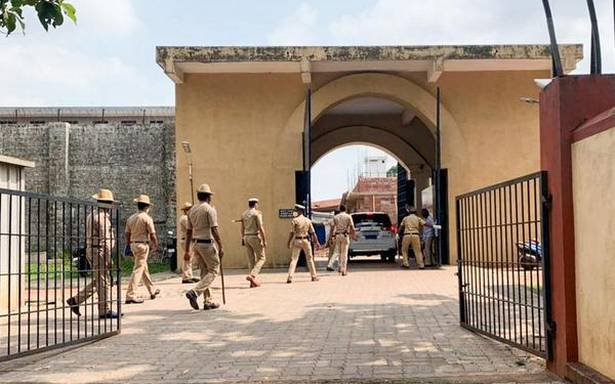 The police recovered knives, clothes stuffed with glass pieces and a few sharp wooden objects in a search at the District Prison here after a group of 21 prison inmates assaulted two inmates and some prison and police personnel in the prison here on Sunday.

Talking to reporters on Monday, Police Commissioner N. Shashi Kumar said that Sameer, an accused in a robbery case, and 20 others attacked Ansar, an accused arrested last month by the Moodbidri Police and Jainuddin, an accused involved in dacoities.

The attack came soon after the barracks were opened at 8 a.m. The group assaulted a couple of the prison personnel who intervened. However, the later sent the the group members to their barracks. Sameer threw rice, kitchen utensils and a few other objects when a team of prison and police personnel went to questioning him about the incident.

During the search, the police recovered few button knives and a set of clothes filled with broken tubelight pieces. They also found a few wooden articles that have been modified into sharp objects. The police also recovered a few mobile phones and some chits containing mobile numbers.

The 21 persons involved in the attack, Mr. Kumar said, are accused of bullying inmates and forcing them obey their orders.

Sameer was involved in 10 cases of burglary and other criminal cases, including an attack on an Assistant Sub-Inspector. “As it was risky to continue to hold this group in the prison, the members were shifted to Belagavi, Shivamogga and Dharwad prisons on Sunday,” he said.

The police will shortly take into custody those involved in the attack. The reason behind the attack is still not known, he added.

04/26/2021 India Comments Off on Knives, other sharp objects found in prison
India