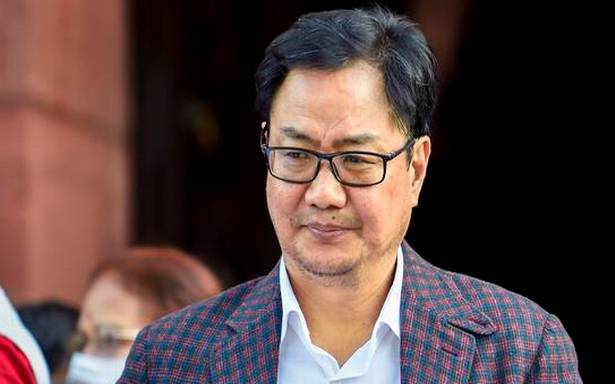 The Union Law and Justice Minister also said that such renaming will not be acceptable to anyone.

Union Minister Kiren Rijiju has dismissed China renaming some places in Arunachal Pradesh and asserted that renaming of places in India by someone outside the country will not change their status.

The Union Law and Justice Minister also said that such renaming will not be acceptable to anyone.

“Arunachal’s names were given by the country and that is acceptable to all. Our traditional names, our community’s identity will remain forever. If someone outside gives some new names, that will not change our status,” he told reporters here on the sidelines of a function on Thursday.

Mr. Rijiju was replying to a question on Beijing announcing Chinese names for 15 places in Arunachal Pradesh.

India has already rejected China renaming some places in Arunachal Pradesh and asserted that the state has “always been” and will “always be” an integral part of India and that assigning “invented” names does not alter this fact.

On December 29, 2021, China’s Ministry of Civil Affairs announced that it had standardised in Chinese characters, Tibetan and Roman alphabet the names of 15 places in Zangnan, the Chinese name for Arunachal Pradesh, according to state-run Global Times.

This is in accordance with regulations on geographical names issued by the State Council, China’s cabinet, it said in a report.

Among the official names of the 15 places, which were given exact longitude and latitude, eight are residential places, four are mountains, two are rivers and one is a mountain pass, the report said.

China’s renaming of the places in Arunachal Pradesh came amidst the ongoing stand-off along the border in Ladakh which started in May 2020.