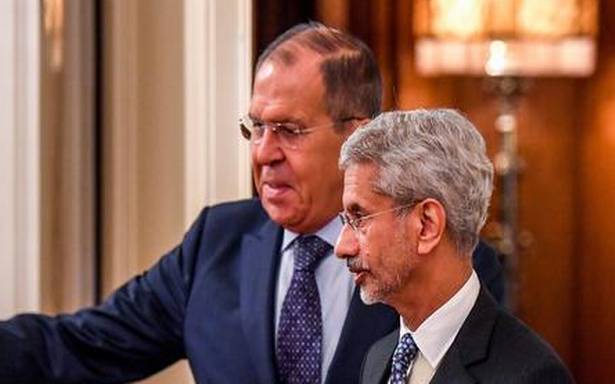 Tuesday’s meeting will provide India with a window to share its frank assessment about the continuing scenario in eastern Ladakh.

An important round of discussion between India and Russia will take place on Tuesday between the visiting Russian Foreign Minister Sergey Lavrov and External Affairs Minister Dr. S. Jaishankar. Mr. Lavrov who will be accompanied by Moscow’s Special Envoy on Afghanistan Zamir Kabulov is expected to brief the Indian side about the Russian plans regarding the difficult peace process underway in Afghanistan.

Tuesday’s meeting will provide India with a window to share its frank assessment about the continuing scenario in eastern Ladakh along the Line of Actual Control.

Mr. Lavrov’s visit will coincide with the tour of India by the U.S. President Joe Biden’s Envoy for Climate John Kerry. The U.S. Embassy’s spokesperson said on Monday that Washington views “India as an important partner on future clean energy research, development, and deployment”.

Mr. Lavrov had visited China in March where both countries put up a joint front against the United States. India, on the other hand, has called upon China to withdraw from the remaining friction points along the LAC following the spirit of disengagement that was achieved at Pangong Tso earlier.

Mr. Kabulov’s presence in the discussion will provide a first hand briefing on the latest Russian moves on the Afghan front. He has argued for engaging the Taliban of Afghanistan for a fruitful negotiation.

Russia held a summit on Afghanistan on March 18 where India was not invited. Tuesday’s meeting is, therefore, being interpreted as a Russian move to update New Delhi about the latest on the issue.

Mr. Lavrov is expected to call on Prime Minister Narendra Modi during his April 5-6 visit which will conclude on Tuesday afternoon with his departure for Pakistan where he will meet Foreign Minister Shah Mahmood Qureshi.

Another major item that is expected to feature in the talks is the pending delivery of the Russian S400 missile defence system to India.

U.S. Secretary of Defence Lloyd James Austin III during his latest visit to Delhi had said he had not raised the issue of sanctions with the Indian side. India is expected to receive the first S400 systems later this year. The delivery may attract U.S. sanctions under CAATSA (Countering America’s Adversaries Through Sanctions Act).

On the visit of President Biden’s climate envoy, the U.S. Embassy spokesperson said, “A key focus for our Administration is supporting and encouraging India’s decarbonisation efforts through clean, zero and low-carbon investment, and supporting India in mitigating its fossil energy use.”

After India, Mr. Kerry is scheduled to visit Dhaka in what is likely to be the most high profile visit by a U.S. official to Bangladesh in recent years. Dhaka, meanwhile has declared lockdown on Monday in view of the spike in the corona virus cases.