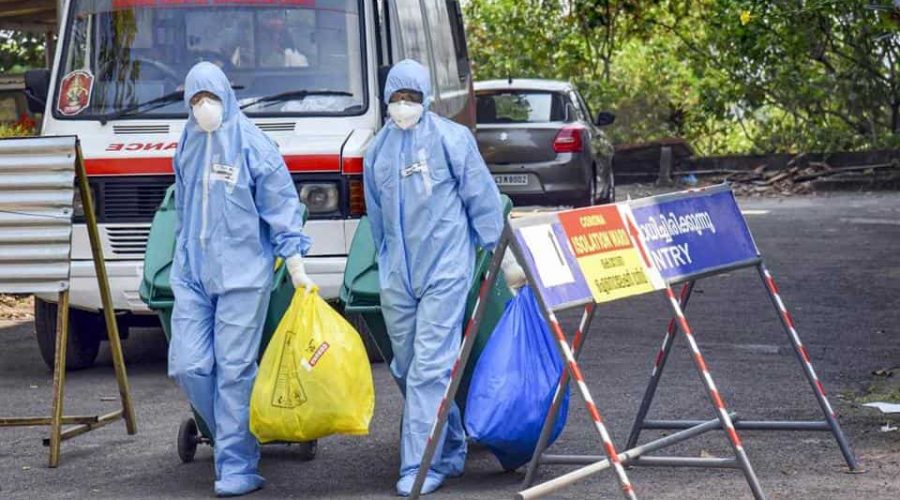 Kerala’s Covid-19 woes continue unabated as the viral caseload on Wednesday crossed 10,000, the highest since the outbreak began in January. Chief minister Pinarayi Vijayan said 10,606 new cases were reported on Wednesday and asked people to listen to the directives of the health ministry to tide over the crisis.

Among those who tested Covid-19 positive is Power Minister M M Mani, the fourth minister to get infected in the state. The pressure on the overworked hospitals is quite visible as most of them are filled to the brim and there is a shortage of beds and ventilators. But the state government put up a brave face saying the state’s mortality rate is the lowest in the country. State health ministry statistics show among 92,161 active cases 610 are in intensive care units and 179 patients are on ventilator support.

The surge in Covid-19 cases came as the state conducted the maximum number of tests (73,816) on Wednesday and experts said it will have to hike tests exponentially to contain the spread. They said the state had conducted only 33 lakh tests in six months and more than 60 per cent of them were antigen tests. Latest statistics show the test positivity rate has gone up to14.37 per cent against the national average of 8.4 per cent. The government has recorded 906 fatalities so far but independent doctors who are monitoring the pandemic situation put the toll at 1622.

“The situation is really alarming. With high density of population and a large number of elderly population the state is going through a difficult phase. Political leadership will have to accept the fact rather than finding refuge in technicalities,” said Dr S S Lal, a public health expert who earlier served with the World Health Organisation. Many health experts in the state are up in arms saying they were kept away and the government was only heeding the bureaucracy.

The CM and the Indian Medical Association had locked horns a couple of days back, with the former criticizing the doctors’ body saying it was propagating half-baked facts. But experts said going by the present surge the state may beat Maharashtra and Karnataka in active cases.

“It is time for the state to surge ahead as a single unit foregoing political differences. Personally, I feel local body elections should be postponed. Lives are precious we have to save them. We are making suggestions to improve the system and minimize damage. But the government is taking them personally and singling out those who criticise it,” said Dr Lal. He said the government will have to come out of its Nipah fight record as it was a self-limiting virus but more dangerous than the present virus.

“This was expected. We have been warning the government about the need for more tests. It is natural once you increase tests, cases will go up. It is time for the state to re-draw its strategies,” said IMA president Dr Abraham Varghese.

However, state health minister KK Shailaja asked people not to panic but take utmost precaution and heed the directives of the government. After the situation deteriorated, the state has strengthened its curbs and asked the police to enforce norms strictly.