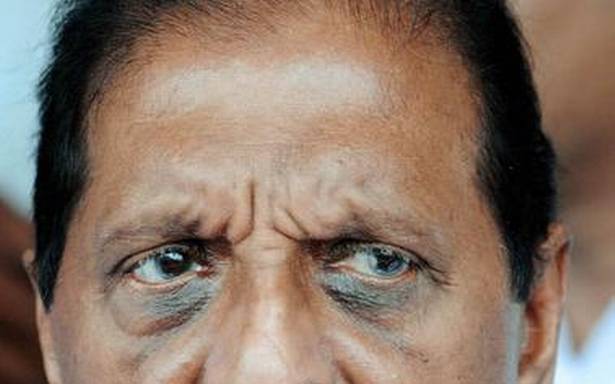 The veteran politician had respiratory illness and was placed on ventilator support and administered supplemental oxygen.

Veteran politician and Kerala Congress (B) chairman R. Balakrishna Pillai, 87, died at a private hospital at Kottarakara in Kollam district early on Monday.

Doctors gave age-related ailments, mainly respiratory illness, as the cause of death. Mr. Pillai was ailing since Friday. He was placed on ventilator support and administered supplemental oxygen. The end came at 3 a.m.

The funeral will be held with State honours at his ancestral home in Kottarakara in the evening.

He was also long a member of the Board of Directors of the Nair Service Society (NSS) and chairperson of the Kerala Congress (B).

NSS general secretary G. Sukumaran Nair paid his respects to the departed leader. He said Mr. Pillai had contributed immensely to the social organisation. “It is a sorrowful day for the NSS,” he said.

Mr. Pillai was active till recently. He had inaugurated the campaign office of his son and Kerala Congress (B) legislator from Pathanapuram, K. B. Ganesh Kumar, gave television interviews, publicly predicted the LDF’s comeback and guided the party’s electioneering.

Mr. Pillai was born into wealth and influence in 1934. His father, Keezhoote Raman Pillai, was a member of the Sree Moolam Praja Sabha.

Mr. Pillai forayed into politics as a member of the Congress student’s union. He rose in the party’s ranks and was elected a lawmaker for the first time in 1960. He had served as Excise and Transport Minister in successive governments.

In 1964, Mr. Pillai quit the Congress and followed K.M. George and 15 other legislators to form the Kerala Congress. The party aspired to give voice to the woes of farmers and uphold the State’s interests. It represented a robust agrarian base in Central Kerala.

Mr. Pillai was one of the architects of the United Democratic Front (UDF) coalition. However, he quit the front in 2018 and allied his party with the Left Democratic Front (LDF). It was a bitter parting of the ways for the octogenarian leader.

He retired from electoral politics after Aisha Potty of the Communist Party of India (Marxist) defeated him in 2006.

Mr. Pillai was a raconteur known for his colourful political oratory. However, a controversial remark cost him his Cabinet post and attracted legal trouble in 1980.

He had said, presumably in the heat of the moment, that Kerala required to go the "Punjab way" to assert its federal rights.

At the time, Pakistan-backed insurgency was at its peak in Punjab. His words ignited a stormy controversy making his continuance in government untenable.

Mr. Pillai’s gift of the gab sometimes resulted in gaffe and earned him accolades and criticism in almost equal measure.

His long political career had its low points. He was disqualified under the anti-defection law. A court found him guilty of corruption in the execution of an irrigation project, and he was incarcerated briefly. Former Chief Minister V. S Achuthanandan had doggedly pursued the case against Mr. Pillai.

A consummate politician, he had the rare honour of serving as grama panchayat president and Cabinet Minister at the same time in the mid-1990s.

Mr. Pillai had dabbled in acting and writing. His autobiography traced the period of tumultuous politics he had witnessed at close hand. Critics feted the book Prisoner 5990 for its candidness and front-seat view of Kerala politics. Mr. Pillai also briefly tried his hand at acting.