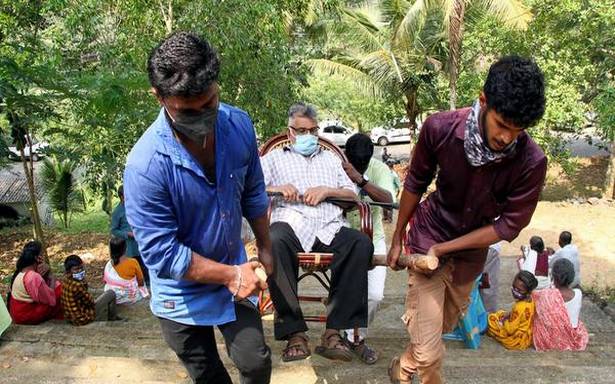 Only 67.17% voter turnout as per provisional estimates

Pathanamthitta, which witnessed a neck-to-neck battle between the UDF and the LDF across the five segments, recorded a marked decline in its overall polling percentage during the Assembly elections on Tuesday.

As per the provisional estimates, the polling percentage of Pathanamthitta stood at 67.17 when the voting ended at 7 p.m. on Tuesday. In the previous elections, this, however, stood at 71.66%.

Of the five seats, Adoor recorded the highest polling percentage of 72.03 while Thiruvalla, with just a 63.34% voterturn out, stood in the last position.

On a clear day, the polling began on a brisk note with the first three-and-half hours recording 24.14% polling. Although it witnessed a lull around midday, the momentum picked up again in the afternoon but the heavy rain that lashed the region appeared to have dampened the electorates’ spirit.

Barring a few stray incidents, the polling remained relatively peaceful. Veena George, the LDF candidate in Aranmula, meanwhile, filed a police complaint against a group of BJP and Congress workers attempting to assault her while visiting a booth in Arattupuzha.

In a separate incident, a 65-year-old person, identified as Gopinatha Kurup, collapsed and died while waiting in queue at a polling station in Vallamkulam.