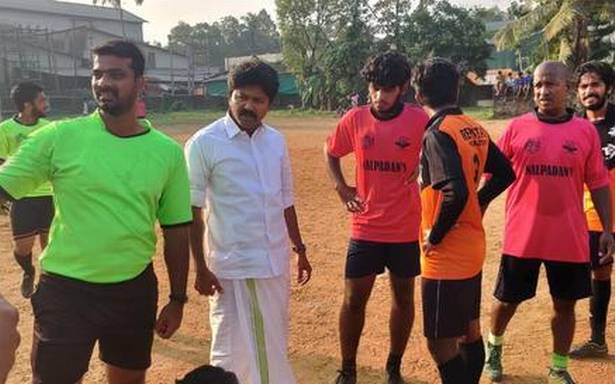 Eldhose Kunnappilly was watching a young lad dribbling past a defender at the football ground in Okkal on Tuesday morning. Later, the youngsters were eager enough to share the summary of the match with him.

After a few handshakes, the United Democratic Front candidate in Perumbavoor constituency moved to the spectators seated in a neat line on the compound wall and sought their help in making it big in the Assembly elections. “I am meeting key sections that include young voters and what better place than a football ground to meet and interact with them,” said Mr. Kunnappilly, sitting MLA, as he started the final phase of his campaigning. His campaign manager said electioneering in an open vehicle accompanied by party workers on two-wheelers had ended on Monday night. “He had visited laksham veedu colonies in Koovapadi in the morning leg of the campaign,” he said.

At Mudakuzha, Left Democratic Front candidate Babu Joseph of the Kerala Congress (M) got a surprise reception when Omana, a homemaker, gifted him pappadams made by her.

“The senior citizens recalled the pension distributed by the Left government. The region, which mostly comprises farming community and unorganised workers, lacked proper roads,” alleged Mr. Joseph. “This will be a close fight going by our assessment from the grassroots-level,” he added. Members of the Democratic Youth Federation of India (DFYI) in Chendakuzhi accompanied their candidate at the key points.

T.P. Sindhumol, the candidate of the Bharatiya Janata Party, had a whirlwind tour of Vengola panchayat.

“I was able to visit all the colonies in the area and interact with the communities there. The visit also helped in identifying the problems being faced by them, especially women,” she said. The vehicle campaign will come to a close on Wednesday. “I plan to have personal interactions in the coming days,” said Ms. Sindhumol.

Twenty20, which has fielded Chitra Sukumaran, seems hopeful of making dents in the vote share of the key fronts. The party is riding on the impressive win it earned in Vengola panchayat (eight seats) in the local body elections held in December.