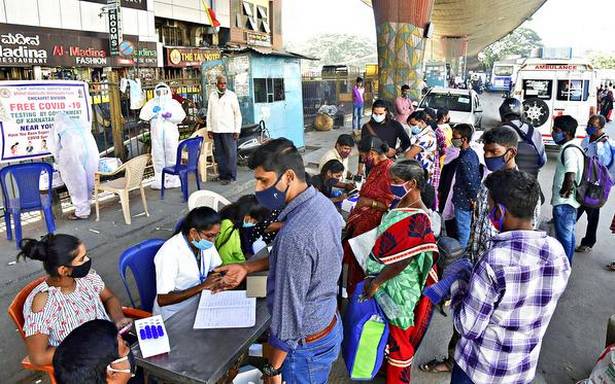 Although the number of total tests in the State breached the one crore mark on Saturday, experts said it is vital to continue the same pace of testing till March to avoid a second wave.

The State’s daily test positivity rate (TPR) has been hovering around 1.46% in the last three days. However, it is important now to sustain the same rate for the next four months, experts said.

“It is vital to maintain a TPR much below 5% at least till March-end. This means, for every positive patient, the State should test 20 persons. Going by the second outbreak in several States, we should continue testing over one lakh cases till March, 75% of which should be RT-PCR,” V. Ravi, senior professor and head of the department of neuro virology at NIMHANS, who is also part of the State’s COVID-19 expert committee, told The Hindu on Saturday.

The TAC, which will meet on November 24, will finalise its recommendations on how the State should brace for a second wave. “We will recommend that the State’s testing strategy be reviewed only after March,” he said.

This is based on the experience of some States and countries where a second wave has begun now. “Delhi, Gujarat, Rajasthan, Haryana and Madhya Pradesh had gone slow on testing after their first outbreak was on a decline,” he said.

Pointing out that the onus is on people, Dr. Ravi said, “People should not become complacent now. They should continue following all COVID-19 precautions diligently.”

With 1,799 patients discharged on Saturday, the total number of recoveries touched 8,34,968. Of the remaining 24,714 active cases, 494 patients are being monitored in the ICU.

11/21/2020 India Comments Off on Keep up pace of testing to avoid second COVID-19 wave: Expert
India