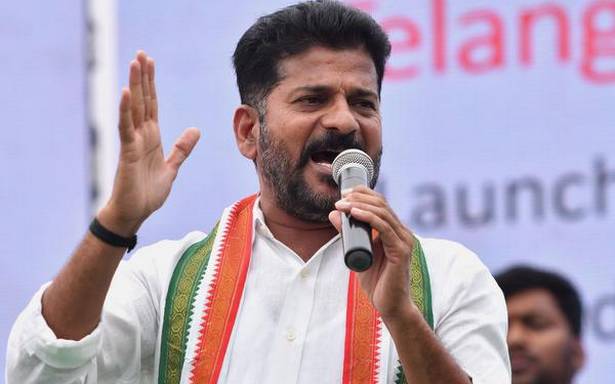 Chief Minister K. Chandrashekhar Rao spoke like a middleman refusing to take responsibility for procurement of paddy, and rather than providing some succour to the farming the community, he is trying to play politics, alleged TPCC president A. Revanth Reddy.

Responding to the Chief Minister’s press conference on Sunday, he said Mr. Rao himself had agreed at the press conference that he would not ask the Centre to buy boiled rice and had written a letter to that effect. “Whom did you ask before writing that letter? Did you interact with farmers associations or those working in the sector,” Mr. Reddy asked and questioned his sincerity in now shifting the blame totally on the Centre.

He alleged that both Mr. Rao and Prime Minister Narendra Modi are together in cheating farmers and playing with their lives.

“Mr. Rao is now posing as if he would take on the Centre but does he have the gumption to do that,” he said and went on to add that no farmer in Telangana will believe Mr. Rao.

The Congress chief also ridiculed Mr. Rao’s assurance that he would now join the farmers agitation against the three new farm laws. “You have met the Prime Minister several times since the agitation started. You did not have the heart to visit the farmers protest sites in New Delhi as you were busy trying to please Mr. Modi fearing your corruption. Now whom are you trying to fool,” he asked.

Mr. Reddy said he expected the Chief Minister to give some solace to the farmers on the paddy procurement but instead Mr. Rao sounded insensitive and further instilled fear among them. “He did not even talk about opening 6,500 procurement centres as promised nor did he refer to the suicide of farmer Beeraiah in Kamareddy. Neither did he refer to the new token system introduced to harass the farmers on harvesting their own produce. But he disappointed lakhs of farmers with his irresponsible attitude,” Mr. Reddy said.

Demanding that fuel prices be slashed in Telangana like several other States in the country, Mr. Reddy alleged that Mr. Rao never raised the fuel hike issue as he too stands to benefit. “Now suddenly he has realised that petrol prices were hurting the common man and he wants people to believe his sincerity,” Mr. Reddy said and asked when other States reduced their VAT component, why is KCR refusing to do so. “We will go to people and expose this hollowness,” he said.

11/12/2021 India Comments Off on KCR and Modi are cheating ryots: Revanth
India