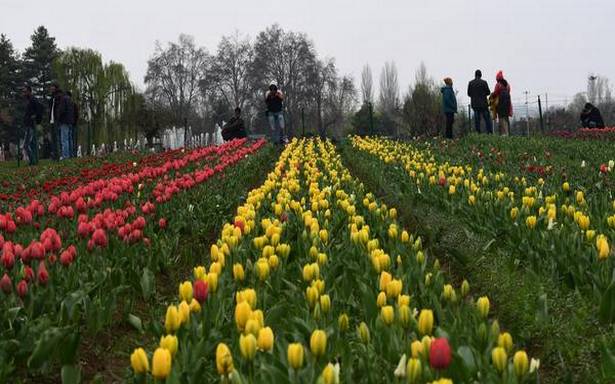 Pan-India promotional activity is being held at prominent places including metro stations, travel marts and other public places to lure tourists.

Kashmir will host a six-day ‘Tulip Festival’ next month to celebrate the arrival of spring, promote tourism, and familiarise visitors with the valley’s rich culture and tradition, an official said on Sunday.

The festival, beginning on April 3, will be inaugurated by Jammu and Kashmir Lieutenant Governor Manoj Sinha.

“All arrangements are in place for the festival and we are looking forward to it,” Deputy Director, Tourism and Publicity, Ideel Saleem said.

He said the festival is being organised to celebrate the arrival of the spring season and to promote the tourism sector in the valley.

A host of activities, including cultural shows and musical evenings, will be held during the festival and national-level and local artists would enthrall the visitors, Mr. Saleem said.

Around 25 stalls would be set up to display and promote the rich traditions, culture, cuisines and crafts of the valley so that tourists become familiar with them, the Deputy Director said.

Another tourism department official said the festival would present a unique opportunity to display the diverse culture and cuisine of Jammu and Kashmir.

A live exhibition of handicraft and handloom products along with a slew of cultural activities would be held during the festival, he said.

The official said pan-India promotional activity has been taken up and enthusiastic campaigns to lure tourists are being held at prominent places including metro stations, travel marts and other public places, he said.

Mr. Saleem said efforts were being made to make the festival a grand success.

Various tour and travel bodies across the country participated in these activities, the official added.

Sound and lighting systems near the Sher-i-Kashmir International Convention Centre and other places, including illumination of the Hari Parbat Fort, are also being undertaken in view of the festival.

Mr. Saleem said the Tourism Department is also planning another major event — Houseboat festival — after the culmination of the Muslim fasting month of Ramzan in May.

“Houseboat is an icon of tourism and is one of the main attractions of the visitors to the valley. The festival will showcase the houseboats at the famous Dal Lake and promote them,” the deputy director said.

There are other events in the pipeline as well in the summer season, he added.

Meanwhile, Baseer Ahmad Khan, advisor to the LG, reviewed the arrangements for the celebration of the festival at a meeting here on Saturday.

The meeting held threadbare discussion on the slew of measures put in place for the successful conduct of the festival.

The advisor stressed for coordination between the Tourism Department, Srinagar Municipal Corporation (SMC) and related departments to put concerted measures in place for the success of the festival.

Mr. Khan directed SMC officers to conduct sanitation and cleanliness drives on a daily basis to keep the garden and its surroundings clean.

He issued directions for the deployment of volunteers at the Tulip Garden to ensure that visitors follow COVID-19 standard operating procedures like wearing a face mask and maintaining physical distance.