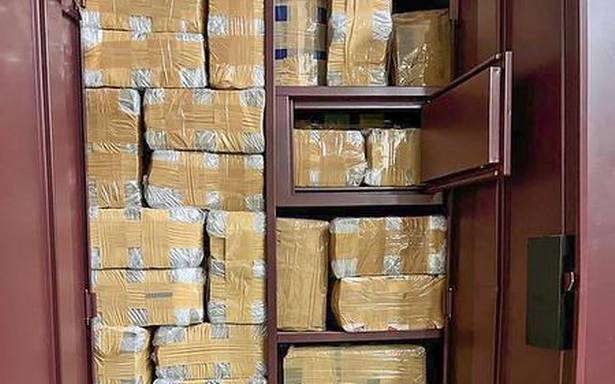 Piyush Jain, the Uttar Pradesh businessman from whose premises in Kanpur and Kannauj tax officials recovered ₹194.45 crore cash, 23 kg of gold with foreign markings and unaccounted perfumery raw material worth ₹6 crore, maintained a low-key life and was self-effacing, according to Kannauj residents.

Traders in Kannauj, where he lives on ‘Jain Street’ in Chipatti Mohalla, where many members of the Jain community reside, say they had no inkling about the alleged wealth amassed by Mr. Jain.

“We knew he was doing well in business but the quantity of notes recovered have left us stunned,” said Suresh Jain (name changed), a neighbour, who is also involved in the fragrance industry.

Mr. Suresh, who has known Mr. Piyush Jain for four decades, said there was no criminal case against anyone in their locality. Mr. Piyush Jain is a “wonderful human being” who lived a “simple life” and did not even carry any security with him, said Mr. Suresh. “I cannot understand how he got trapped in this matter,” he added.

People in Kannauj say Mr. Piyush Jain was dressed simply. Besides his bungalow, he owned a scooter, which he was often seen driving around, a Hyundai Santro and an old Toyota car, said Vikas Gupta (name changed), a prominent trader.

According to Mr Gupta, Mr. Piyush Jain’s father worked in a soap manufacturing company in Mumbai. Piyush and his brother both had masters degrees in science while their wives had bachelors degrees in science. Using this knowledge of chemicals, the family started manufacturing compounds for perfumes, said Mr. Gupta. The family mastered the art of manufacturing sandalwood oil through chemicals at a low cost, rather than from natural sandalwood, and thus started earning huge profits, said Mr. Gupta.

Over time, the Jains developed their business and also supplied compounds to foreign countries. Among others, Mr Piyush Jain supplied fragrance to the Shikhar Pan Masala company.

Mr. Gupta also said Mr. Piyush Jain “had a lot of faith in his religion” and made contributions of ₹60-70 lakh for the building and revamp of two Jain temples, including one in Tirwa.

While the BJP led by Prime Minister Narendra Modi have linked Mr. Piyush Jain to the Samajwadi Party — which has strongly denied the connection — members of the Jain community in Kannauj say he had no overt political links and was busy with work or religious activities.

A perfume trader from the Jain community said he would often bump into Mr Piyush Jain at the temple. “He is a simple and sober person, had nothing to do with the society, even to the extent that he never made anyone his confidant,” said the trader.

The Directorate General of GST Intelligence said it first recovered unaccounted cash of ₹177.45 crore from the residential premises of Odochem Industries in Kanpur, in the biggest ever seizures by the CBIC officials.

The DGGI officers then recovered ₹17 crore in cash from residential factory of Odochem Industries in Kannauj, while also recovering around 23 kgs of gold and huge quantity of unaccounted raw materials used in manufacture of perfumery compounds including more than 600 kg of sandalwood oil hidden in an underground storage, having a market value of ₹6 crore. Since the gold recovered has foreign markings, the Directorate of Revenue Intelligence (DRI) was roped in for necessary investigation, said the DGGI.