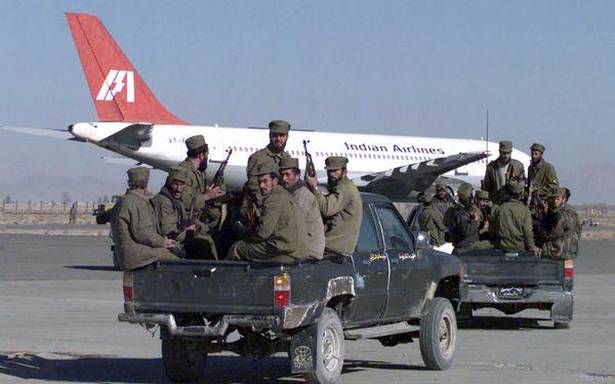 At least 154 Indian Airlines passengers and crew were held hostage for eight days and the stand-off ended when hardcore terrorists Masood Azhar, Omar Sheikh and Mushtaq Ahmad Zargar were released

The release of three dreaded terrorists in exchange of hijacked Indian Airlines passengers in Afghanistan’s Kandahar in 1999 is the "worst capitulation" to terrorists in India’s modern history, says BJP MP Subramanian Swamy.

Mr Swamy has come out with a book Human Rights and Terrorism in India which traces how the combating of terrorism can be harmonised with human and fundamental rights within reasonable restrictions that is permitted by the Constitution and upheld by the Supreme Court.

It is the thesis of this study that to deter terror, India as a nation must foster a concept of identity, he says.

"This identity must have reorganised the human rights foundation. A strategy to deter terror with human rights secured then can be formulated," he writes in the book, published by Har-Anand Publications.

"From a study of nations that have remained united, and contrasted with those which have disintegrated, it seems that the crucial element for national integrity is the concept of ‘who we are’ our identity, that the people within a geo-political boundary accept. This concept, however, has to be nurtured, renewed, continually enriched, and given substance," it says.

According to Mr Swamy, India is under a "terrorist siege today, of Pakistan, Taliban-controlled Afghanistan, ISIS and other Islamic religion-based terrorists, and Northeast insurgents supported by China and we need now effective total solution not piecemeal kneejerk ad hoc measures".

He also says that "never before such a formidable combination of covert and overt subversion has threatened India’s geographical integrity and terrorised India’s peace-loving population through violence".

The Rajya Sabha member then claims that the political goal of terrorists is to "demoralise the Hindu and undermine the Hindu foundation of India in order to destroy the Hindu civilization", and the government must "never capitulate and never concede" to any of their demands.

"The release of three hardcore terrorists from jail in December 1999, including Mohammed Azhar of Jaish-e-Mohammed, for release of hijacked Indian Airlines passengers in Kandahar, in Afghanistan is an example of such a disastrous capitulation," he writes.

Five terrorists hijacked the IC-814 plane during its flight from Kathmandu to Delhi on December 24 that year. At least 154 passengers and crew were held hostage for eight days and the stand-off ended when hardcore terrorists Masood Azhar, Omar Sheikh and Mushtaq Ahmad Zargar were released and the then external affairs minister Jaswant Singh took them on a special plane to Kandahar.

Over the years, the Opposition has been alleging that the NDA government "surrendered to terrorists" in 1999, but the saffron party has been maintaining that it was a "necessity" at that time as the Vajpayee dispensation had to save the lives of so many people.

Terming it the "worst capitulation to terrorists in our modern history", Mr Swamy says the Atal Bihari Vajpayee government released the three terrorists "even without getting court permission (required since they were in judicial custody)".

They were "released" on December 30, 1999 but the "court having judicial custody was informed only on January 3, 2000 and it upheld the fait accompli on January 29, 2000 after passing strictures", he says.

"Moreover, the terrorists were escorted by a senior minister on the PM’s special Boeing all the way to Kandahar as royal guests instead of being shoved across the Indo-Pakistan border. Worse still, all the three after being freed, went back to Pakistan and created three separate terrorist organisations to kill Hindus," Mr Swamy writes.

What should India have done instead? Mr Swamy says in the first place, it is a mystery how the IA plane "shrewdly brought by the pilots to land in Amritsar" was allowed to take-off again.

"That was a missed chance which counter-hijack experts find inexplicable. Who was responsible for allowing the plane to take-off? At very least, the tyres of the plane should have been punctured by the NSG present at the airport, positioned with long-range rifles to immobilise the aircraft. A future government ought to inquire into this matter and fix responsibility," he says.

According to Mr Swamy, the cost paid could have been minimised if the Indian government had threatened to take counter ground action if any of the passengers had been harmed by the hijackers when the plane had landed in Kandahar.

He says the whole Kandahar episode proves that we should "never negotiate with terrorists and never yield".

He then goes on to cite another incident of 1989, when to obtain the release of Mufti Mohammed Sayeed’s kidnapped daughter Rubaiyya, five terrorists in Indian jails were set free by the then VP Singh government.

"This made these criminals in the eyes of Kashmiri separatists and fence-sitters as heroes, as they had brought India’s ‘Hindu establishment’ on its knees. To save Rubaiyya, it was not necessary to surrender to terrorist demands. There were other ways. But the then government were of capitulationists in outlook, they did not explore them," Swamy says.