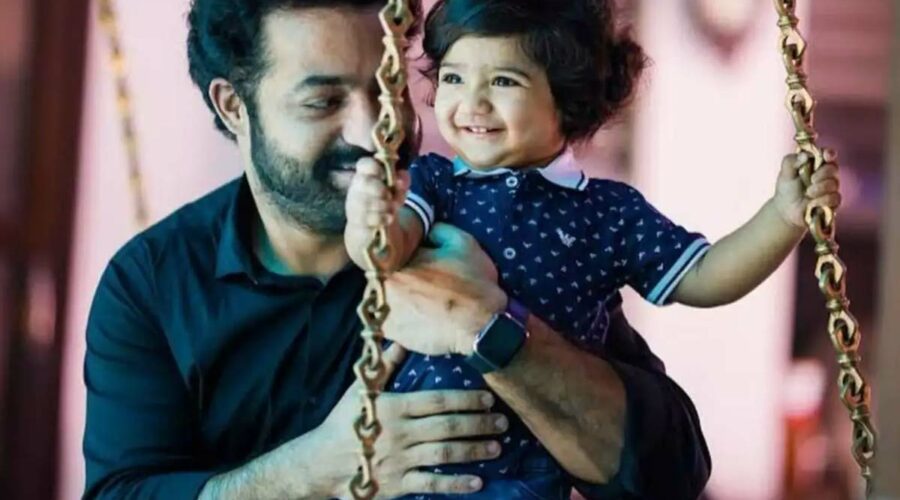 The couple Young Tiger Jr NTR and Pranathi has two sons- Nandamuri Bhargav Ram and Abhay Ram. According to the latest report, Aksharabhyaasam function held for Nandamuri Bhargav Ram, the younger son of Jr NTR on Sunday.  It was a private event that was held at the residence of Tarak, in Jubilee Hills. Now the pic of  Jr NTR from Aksharabhyaasam function are going viral on the social media.

Jr NTR got married to Lakshmi Pranath in  the year 2011, and Abhay Ram was born on 22nd July 2014 whereas Bhargav Ram will be turning two on coming  14th June.

On  the work front, Jr NTR will be seen playing the lead role in upcoming multilingual movie RRR which also has Mega Power Star Ram Charan in the lead role. It is being helmed by SS Rajamouli of Baahubali and Eega fame whereas is bankrolled by DVV Danayya. The big budget entertainer also has Alia Bhatt, Olivia Morris, Shriya Saran and Ajay Devgn in the crucial roes. The much hyped movie RRR is slated to hit the theaters on 13th October 2021 .

After wrapping up the shoot of RRR, Tarak will start working with Prashanth Neel of KGF and Salaar fame for a project.