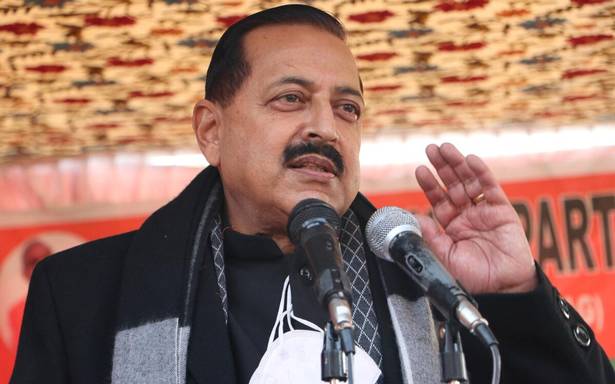 Mr. Randhawa has been asked to reply within two days along with any evidence to prove his claim.

Mr. Randhawa, who is the president of Stone Crusher Owners Association, levelled serious allegations of corruption against Mr. Singh’s office in Jammu over the issue of mining policy and also threatened to immolate himself next week.

Mr. Singh’s office in Jammu had also taken serious note of the allegations and set a deadline for Mr. Randhawa of 24 hours, asking him to prove his allegations or seek a public apology otherwise get ready to face a defamation case of ₹1 crore.

“This notice of show cause initiates disciplinary proceedings against you in line with directions of Jammu and Kashmir Bhartiya Janata Party President (Ravinder Raina) with regard to addressing a press conference and a series of media interactions by you while levelling unfounded allegations against a senior leader of party holding responsible position in the Union Council of ministers,” reads a letter by the three-member disciplinary committee addressed to party Secretary Randhawa.

The letter, signed by the chairman of the BJP’s disciplinary committee Sunil Sethi and members Virenderjeet Singh and N.D. Rajwal, took note of the “unparliamentary language” used by the leader, terming it “highly objectionable”.

“More so, this has prima facie tarnished the image of the party, believing strictly in discipline and decency. You are hereby directed to file your reply along with evidence, if any available with you, within next two days,” the letter said, adding on receipt of the reply, the next date in the matter would be fixed.

The letter said the proceedings would be done expeditiously and the report will be submitted to J&K BJP president within two weeks positively.

Earlier during the day, Mr. Randhawa said he had not rebelled against the party or the leadership, but wanted the “facts” to reach the high command including Prime Minister Narendra Modi.

Mr. Randhawa alleged that the registered stone crushers are facing the worst of the times since 2017 and their children are on the verge of starvation due to the mining department.

He made allegations of Mr. Singh’s Jammu office being hand-in-glove with the mining department of the Union Territory.

“I want to clarify that BJP has no role in it. I have been a BJP worker for the last 30 years while Singh is just a decade old and was introduced into the party by me and also ensured a ticket to him in 2014 parliamentary elections,” he said.

Reacting to the allegations of the senior party leader, BJP executive member, Sanjeev Sharma expressed his displeasure, saying, “He had levelled allegations on this office as well as the Union Minister directly.”

“If he had any proof, he should come forward within 24 hours and make it public or otherwise tender a public apology to the Union minister who has decided to file a defamation case of ₹1 crore against him,” Mr. Sharma told reporters at a presser here.

Meanwhile, the Congress has demanded an impartial probe into the allegations levelled by senior BJP leader against party colleague in the Prime Minister’s office.

“It is a serious matter as allegations were levelled against a senior BJP leader in the PMO and bureaucracy…we appeal to Lt Governor to order a high level probe to unravel the truth,” senior Congress leader and former minister Yogesh Sawhney said.