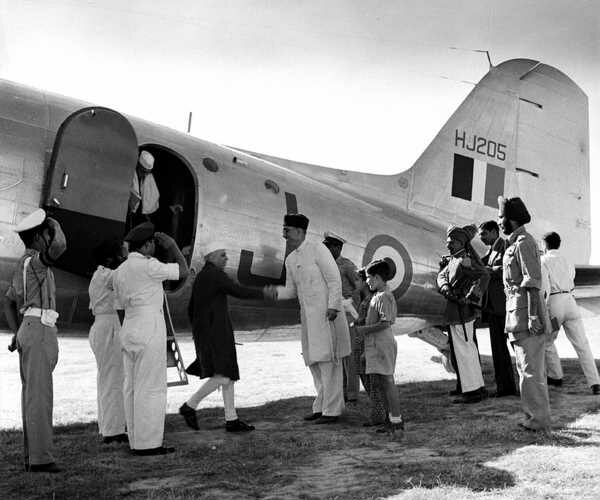 The disclosure of files provided by India’s second army chief General Sir Roy Bucher to Nehru Memorial Museum and Library about Jammu and Kashmir related to the period of 1947-49, which may throw light on Accession, is in ‘national interest,’ the central information commission has observed in an order.

The commission stopped short of ordering disclosure of these crucial documents, withheld from the public on orders of the ministry of external affairs.

Information commissioner Uday Mahurkar has instead asked the NMML’s central public information officer ‘to take up the matter with higher officials’ and ‘secure the necessary permission’ before sharing the information with Right to Information activist Venkatesh Nayak.

The highest adjudicating authority on RTI matters, the CIC, did not specify if the information can be disclosed if there is an objection from ‘higher officials.’

RTI activist Venkatesh Nayak had sought the documents from NMML under the transparency law but it was denied to him without citing any exemption clauses in the RTI Act.

“Keeping in view the facts of the case and the submissions made by both the parties, the commission observes that the objective of the appellant (is) in the national interest. Therefore, the commission directs the CPIO to take up the matter with higher officials of the respondent authority and cite this order of the commission and secure the necessary permission from them before sharing the information with the appellant,” Mahurkar said in the order.

Nayak while researching accession of Jammu and Kashmir had stumbled upon an interview of Bucher to noted biographer B R Nanda, couple of decades after his retirement in 1949.

“He (Nayak) said the operation of the instruments of accession was handled by the then 2nd army chief and there are some documents connected with him which have not been disclosed to the public so far but which throw light on the truth of accession,” Mahurkar noted in his order.

In the interview Bucher had made multiple references to files and papers related to Jammu and Kashmir affairs for the period 1947-49 compiled by him and given to the NMML, Nayak said.

Nayak said he had pressed for larger public interest in the disclosure of the information as October, 2021 will usher in the 75th anniversary year of signing of instrument of accession by Maharaja Hari Singh but Information Commissioner Uday Mahurkar used the word “national interest” in his order.

The NMML has kept this documents closed from public scrutiny even after 70 years on the instructions of the External Affairs Ministry, he said.

He used the RTI Act to seek inspection of files and records submitted by Bucher to NMML among other details such as a list of documents held by the prestigious library which are closed to the public.

NMML was prompt enough to give details of documents which are closed to the public but said it cannot share the Bucher papers as they are withheld on the instructions from the ministry of external affairs.

A record can be withheld under the RTI Act if it comes under any of the exemption clauses listed under the law but the NMML did not cite any of the clauses given under the Section 8 or 9 of the Act while refusing to share the details, Nayak said.

In his appeal before the commission, Nayak said it was the statutory duty of the CPIO to invoke the third party procedure under Section 11 of the RTI Act to the CPIO, ministry of external affairs, to ascertain his or her views regarding disclosure of the Sir Roy Bucher papers.

By not doing so, both the CPIO and the FAA have been neglectful of their duties under the RTI Act, he said.

Access to the papers handed over by General Sir Roy Bucher to NMML will be of immense value to counter the controversy that has been created with regard to the actual date of signing of the Instrument of Accession and its acceptance, Nayak said in his arguments before the Commission.

The activist also relied upon the institution of declassification policy of official records by the government for the purpose of compiling war and operations histories by the ministry of defence which was put in public domain on June 12, 2021.

“In view of the said policy of the government of India, vis-à-vis declassification and archiving of records relating to India’s war histories, this appellant believes that the information sought…squarely falls within its ambit and purpose,” he said.

In his order, information commissioner Mahurkar noted that NMML CPIO submitted that they do not have any official intimation from the government to disclose this information despite the policy decision of the Central government.

“The respondent (NMML) further averred before the commission that PIO has rightly pointed out that until and unless the government gives instruction to NMML to make the said information public they cannot do so. The Appellant however stuck to his position that the information should be revealed under the RTI Act in larger national interest which overrides everything else,” Mahurkar said.