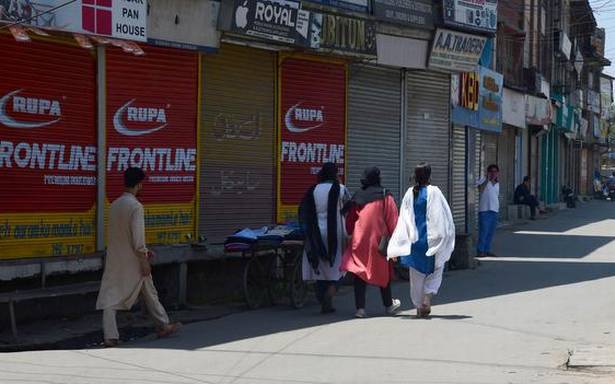 Traders in Jammu are organising a one-day shutdown to protest against the ‘negative’ fallout on the businesses here due to a slew of measures taken by the Lieutenant Governor’s administration after the reading down of Article 370 on August 5, 2019.

“We stood behind the Centre on Article 370 and 35A. However, the kind of attitude of the L-G government towards Jammu people is not expected. Discontentment is on the rise in Jammu,” Jammu Chamber of Commerce and Industry (CCI) president Arun Gupta said on Monday.

He accused the Union Territory (UT) administration of “disturbing Jammu trade” by measures that allowed outsiders to bid for sand mining and liquor licences. “The move to open around 100 stores by the Reliance company, which will have all goods under one roof, will dent the businesses of small traders in Jammu. It may provide jobs to 1,000 locals but will snatch livelihood of thousands of local traders,” he said.

According to the JCCI, the Reliance company will set up 30 such stores in Kashmir valley and around 100 in the Jammu region.

Traders in Jammu are also upset with the decision to end the annual shifting of J&K’s capital, locally called “Darbar Move”, between Srinagar and Jammu.

“The government might have saved some money by this measure but without realising that hundreds of Kashmiris would come to Jammu every winter and purchase goods here. It seems the government wants Kashmiris to be in Kashmir and Jammu people in Jammu. Then split the two into UTs.”

He said the BJP, ruling at the Centre right now, was part of the agitation launched in 1989-90 in Jammu against the move by the Farooq Abdullah regime to stop the “Darbar Move”.

The JCCI, which is organising the shutdown on September 22, has also demanded early restoration of statehood of J&K. “Unless statehood is restored, the situation will not improve,” he said.

Mr. Gupta warned that if the anti-Jammu measures were not stopped, the JCCI will call for an indefinite strike in Jammu.

It will be the first such shutdown in Jammu ever since J&K was reduced to a UT in 2019. The Jammu Dogra Front also opposed setting up of Reliance stores claiming “it will add to unemployment”.

“The NC extends full solidarity with the trade, commerce and industry against anti-trade and commerce moves of the administration,” a spokesman said.

A spokesman of the Jammu Muslim Front said, “The recent order of stopping the Darbar Move has broken the back bone of the trader community. Allowing the Reliance company will swallow small traders.”

He said the JMF strongly resent the August 5 decisions “which was a grave mistake”.