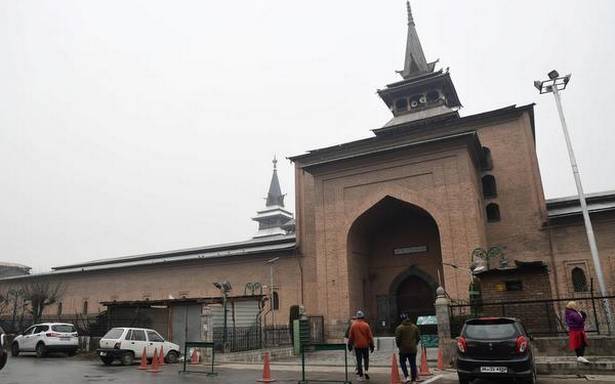 “Mirwaiz Umar Farooq (the current Mirwaiz of Kashmir) continues to be under house arrest.”

Jamia Masjid, the grand mosque of Kashmir, here remained shut for congregational prayers for 45 Fridays this year, its management body said on Friday.

It appealed to authorities to stop “this grave injustice” against the Muslims of the Valley and open the mosque for the prayers.

“As the year ends, central Jamia Masjid – the religious and spiritual centre of the people of Kashmir – still remains out of bounds for Muslims of the valley for obligatory Friday prayers as its lockdown by authorities continues,” Anjuman Auqaf Jamai Masjid, which manages the mosque, said.

It said the mosque has been “forcibly locked down” for 45 Fridays this year – consecutively for 21 Fridays so far.

“In the five years from 2016 to 2019, Jamia Masjid has been locked down for 112 Fridays. This data puts to shame the forcible closure of the mosque during the periods of worst autocratic rule that Muslims of Kashmir have suffered,” the Anjuman said.

It said the traditional ‘Majlis of Waz-o-Tableegh’ (religious sermon) delivered from the pulpit of the historic mosque for centuries by ‘Mirwaizeen-e-Kashmir’ has also not been possible with the lockdown of the mosque.

“Mirwaiz Umar Farooq (the current Mirwaiz of Kashmir) continues to be under house arrest for the third year in a row since 2019. The sorrow and pain this causes to people is unmitigated,” the Anjuman said.

The people of Kashmir, ulemas (preachers) and the Anjuman have repeatedly been urging the authorities to allow people to offer Friday prayers in Jamia Masjid and release the Mirwaiz “whose all human rights have been seized” but to no avail, it said.

“Anjuman once again asks the authorities to stop this grave injustice against the Muslims of the valley and open the mosque to people and release their Mirwaiz,” it added.

12/31/2021 India Comments Off on Jamia Masjid in Srinagar remained shut for prayers for 45 Fridays this year, says Anjuman
India