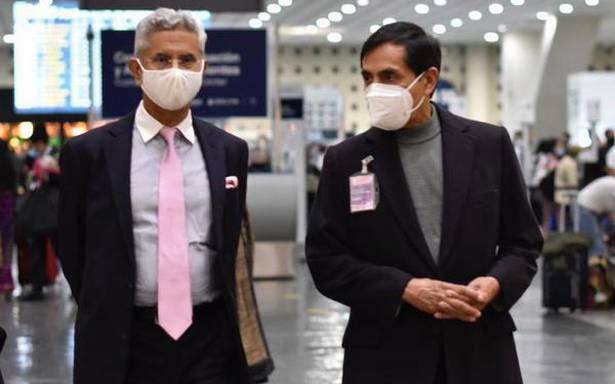 This is Jaishankar’s first visit to the North American country as the External Affairs Minister.

External Affairs Minister (EAM) S. Jaishankar has arrived in Mexico for a three-day official visit with an aim to boost bilateral cooperation in trade and investment as well as other areas with one of India’s top trading partners in Latin America.

This is Jaishankar’s first visit to the North American country as the External Affairs Minister.

He was received by Minister of Finance and Public Credit Rogelio Ramírez de la O with whom he discussed Mexico’s response to the COVID-19 pandemic.

Also read | Mexico urges Haitians at U.S.-Mexico border to give up and head south

“Thank Minister of Finance and Public Credit @R_Ramirez_O for receiving me. Discussed Mexico’s response to the Covid challenge,” Jaishankar said on Twitter.

Jaishankar, who is in Mexico at the invitation of his Mexican counterpart Marcelo Ebrard Casaubón, reached here after concluding his visit to the U.S. for the 76th session of the United Nations General Assembly.

During his visit, Jaishankar will participate in the commemorative events of the 200th anniversary of the consolidation of Mexican Independence along with other world leaders.

In addition to his meeting with Mr. Casaubón, he will also call on President of Mexico Manuel Lopez Obrador and interact with the leading CEOs and the business community in Mexico, which is currently India’s second largest trade partner in Latin America and is a member of the United Nations Security Council (UNSC) alongside India for the 2021-22 period, according to the Ministry of External Affairs (MEA).

Jaishankar meets Singaporean counterpart in US

10/02/2021 India Comments Off on Jaishankar on 3-day visit to Mexico to discuss bilateral, trade and investment cooperation
India