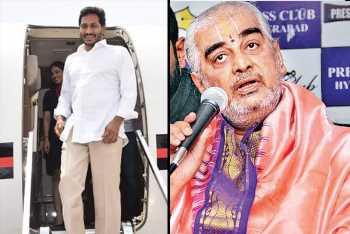 Tirumala Tirupati Devasthanams (TTD) former chief priest Ramana Deekshitulu is likely to re-enter Tirumala as it is learnt that YSR Congress president and Chief Minister-designate Y.S. Jagan Mohan Reddy has given the nod. Jagan visited the Tirumala shrine on Tuesday evening. During the YSRCP Chief’s visit, Ramana Deekshitulu reportedly went to meet Jagan at Padmavathi guest house where he was staying but the CM designate told him that he would meet him in the temple on Wednesday.

Recently, Deekshitulu met Jagan in Kadapa before the poll results were declared and blessed him. At the same time, he urged the YSRC chief to think his removal from the TTD.  The TTD former chief priest hogged the limelight by making controversies statement and levelling charges against the government’s decisions. Later, he began targeting the Telugu Desam Party and took objection to the decisions taken by the state government.

Following the allegations on digging the premises of the temple, discrepancies in according traditional welcome to Bharatiya Janata Party  (BJP) national president Amit Shah, repercussions after holding discussion with BJP MP Subrahmanyam Swami , the TDP government removed Ramana Deekshitulu from the post. At that time, the YSR Congress took serious objection to the removal of the TTD chief priest and stood in support to him.