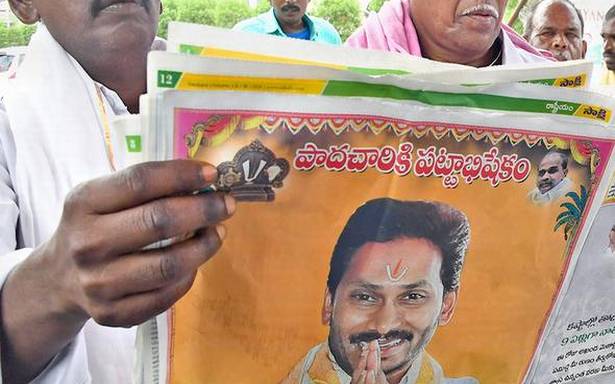 Following in footsteps of his father, Y.S. Jagan Mohan Reddy chose to take oath alone as the Chief Minister of Andhra Pradesh amidst a huge gathering at Indira Gandhi Municipal Corporation (IGMC) stadium here on Thursday.

His father, Y.S. Rajasekhara Reddy, also took oath twice as Chief Minister of combined Andhra Pradesh alone, first in 2004 and again in 2009. YSR later expanded his Cabinet. Mr. Jagan announced that the Cabinet expansion would be taken up later.

Rajasekhara Reddy, immediately after being sworn in as Chief Minister, signed the first file to keep his election promise of free power for farmers, a popular demand at that time. Amid loud cheers, he also announced waiver of electricity dues of farmers and a better empowerment package for women. YSR promised to provide a clean, transparent and honest government and an endeavour to change the face of the State.

Mr. Jagan signed the first file relating to social welfare pensions. He announced a hike in senior citizens’ pension from ₹2,000 to ₹2,250 per month. The pensions would be scaled to ₹3,000 per month in a phased manner. Promising transparent and corrupt-free governance, Mr. Jagan also proposed a call centre that will allow anyone to get in touch with him directly in case of demand for bribes or delay in implementation of government schemes.

Both father and son undertook walkathons to reach out to the people. While Rajasekhara Reddy, who was the Congress Legislature Party leader, began his padayatra named Praja Prasthanam, to highlight the drought-related problems from Chevella in Ranga Reddy district of combined Andhra Pradesh in 2003, Mr. Jagan took out Praja Sankalpa yatra.

In a similar fashion, TDP national president N. Chandrababu Naidu walked the length and breadth of the combined Andhra Pradesh which was called Vastunna Meekosam.

Sticking to his promise, Mr. Naidu appended his first signature on crop loan waiver file immediately after taking oath as Chief Minister in 2014.

Mr. Naidu also declared writing off the loans of self-help groups in the State and signed files related to the closure of belt shops (illegal liquor vends in villages), enhancement of pension to ₹1,000 a month to old people and widows and up to ₹1,500 in two slabs for physically-challenged, and implementation of NTR Sujala, a scheme for supply of clean drinking water to villages.

These three padayatras and the promises related to the signing of the first files have changed the political narrative of Andhra Pradesh both before and after bifurcation.