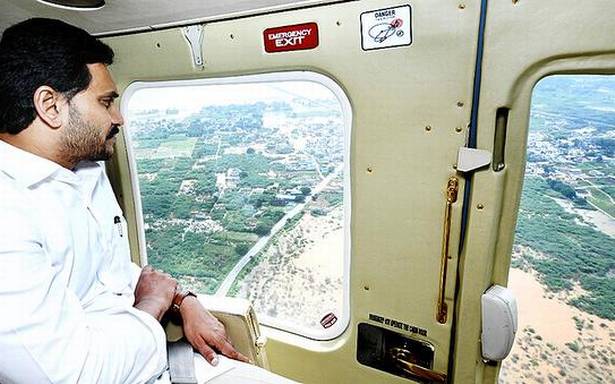 Accompanied by Home Minister M. Sucharita and Panchayat Raj Minister P. Ramachandra Reddy, the Chief Minister arrived in Kadapa by a special flight in the morning. Later, along with his Cabinet colleagues, he boarded a helicopter for a four-hour aerial survey of the flood-ravaged areas.

The officials said the aerial survey covered the badly hit Tirupati municipal corporation, the Somasila project belt across Nellore and Kadapa districts, and the Rajampet division.

After the aerial survey, the Chief Minister’s entourage landed at Tirupati international airport, from where Mr. Jagan returned to Vijayawada by a special flight.

Chittoor Collector M. Hari Narayanan appraised Mr. Jagan about the flooding of low-lying areas in Tirupati and Chittoor municipal corporations and damages to roads and crops.

The Chief Minister told the officials to focus on rehabilitation work and evacuation of the affected people as and when necessary. He also enquired about steps initiated for food relief in the affected areas and the arrangement of medicines to the needy. Mr. Jagan cautioned the officials to be alert to the possibility of breaches of tanks and flooding.