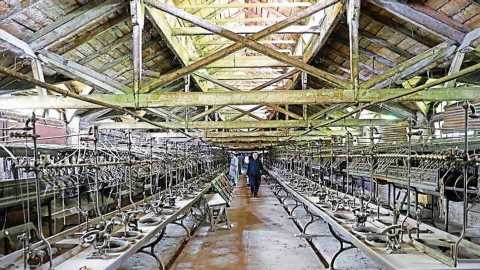 If everything goes as planned, a 120-year-old decaying silk factory in Srinagar may soon turn into an arts and culture centre.

The Jammu and Kashmir government is planning to conserve filatures of the silk factory or Resham Khana, which have remained defunct for the past three decades, to revive cultural tourism and showcase the state’s glorious past.

The government’s industry department has invited local and international architectural firms and multi-disciplinary design teams to a competition in which the participants will suggest steps to “adaptively reuse” the filatures and turn them into an arts, crafts and cultural hub. The competition will also focus on conservation and enhancement of the landscape of the site.

“The conservation idea came after a World Bank team visited the site and expressed shock after seeing the remnants of the silk factory. The team proposed restoration of the architectural marvel and develop it into a cultural and heritage centre,” said Javaid Iqbal, managing director, Jammu and Kashmir Industries Limited.

“We will use the winning designs to draw an overall draft. The experts will discuss and develop a broader concept paper and then World Bank will come into picture for funding,” said Iqbal.

The filatures were set up about 120 years ago by Dogra ruler Maharaja Pratap Singh in 1900s. Primarily made of brick, wood and stone, it housed almost 2000 silk workers at its peak.

Since 1989, the silk reeling machines in the three filatures and their 580 basins in which cocoons used to be processed have remained defunct after the factory shut down owing to decreased production and huge loses. The production of raw silk at the filatures which stood at 57,000 kg in 1980-81 had gone down to 16,000 kg in 1989-90, registering a decrease of 72%.

Nestled amid gigantic chinar trees, the silk factory complex is an important industrial heritage site for Jammu and Kashmir. The government had started reeling silk in one of the filatures last year but that was on a very limited scale.

Sajid Nazir, nodal officer of J&K industries and commerce department for World Bank projects, said the plan was to conserve whatever existed there instead of rebuild anything. “Designers are free to give ideas and interpretations. Some very good firms have shown their interest in the competition,” Nazir said.

He said the place could be used for different cultural events. “If preserved, there can be a number of activities, like exhibitions and cultural functions,” he said.