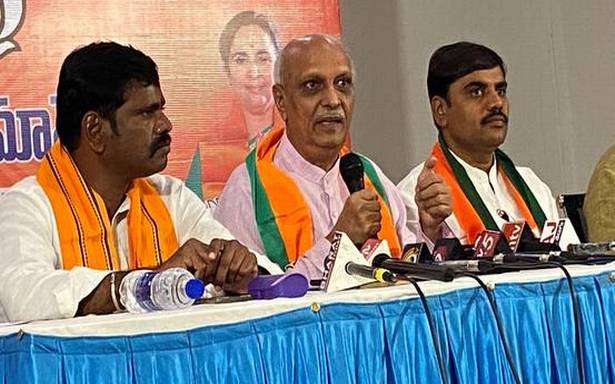 Consider the ‘laudable achievements’ at the macro level before casting vote, he tells intelligentsia

BJP political affairs committee (PAC) chairman and former Chief Secretary of Andhra Pradesh I.Y.R. Krishna Rao has urged the people to understand the macro picture at the national level before casting their vote at the hustings.

Addressing the intellectual community comprising the literate, academic, and professional sections of the temple city on Sunday, Dr. Krishna Rao spoke of the “pioneering steps” of the Union government and the “laudable achievements” made at the national level such as abrogation of Article 370, getting the Ram Mandir issue resolved in an amicable way and within the legal and constitutional framework, passing the CAA etc.

“Pakistan, the unfriendly neighbour that has always been an irritant for us in the international affairs, is now reduced to nothing,” Mr. Krishna Rao said, attributing it to the NDA regime’s ability to recalibrate international equations.

The former Executive Officer of the TTD also wanted to know what the world famous religious institution had done to promote Hinduism and to thwart the attempts towards forced conversions.

“Earlier, we had schemes to build temples in Dalitwadas and fishermen hamlets, train the local community in priesthood and make them administer their own temples, which helped prevent conversions to a large extent. Today, the TTD is collecting huge money from the people in the name of SRIVANI Trust for building and renovating temples, but where is the action plan? What has the TTD done so far with the money?” Dr. Krishna Rao sought to know.

Dr. Krishna Rao cautioned the intellectuals not to fall prey to the “sustained misinformation campaign” run by the regional parties through their frontal media houses to project the BJP in poor light.

“Since the last general elections, the well-tutored regional media still parrots the same phrase – injustice to Andhra Pradesh. People are not naive to believe these words any more,” he pointed out.

Perceiving the ‘Modi wave’ sweeping across the country, he wanted Andhra Pradesh to adjust its sail to move in the same direction to reap the benefits of the welfare measures showered upon by the Centre.